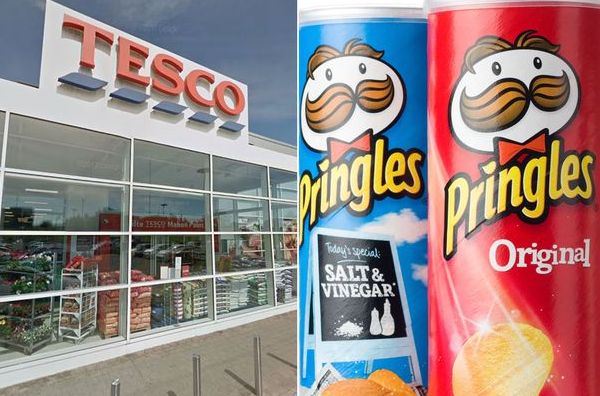 A WOMAN in Ireland was jailed earlier this month after she opened a £1.30 pack of Pringles.

A judge the young woman for TWO MONTHS for causing criminal damage to a €1.50 tube of Pringle crisps in Tesco’s. 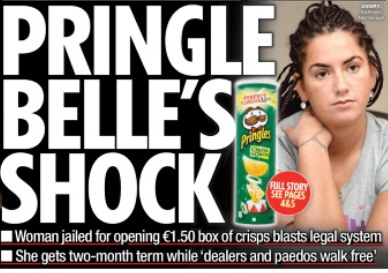 She opened the packet of Pringles in a Tesco’s were she was barred, but she had offered to pay for the Pringles.

McDonagh from Cork pleaded guilty to causing criminal damage to the €1.50 packet pringles in December .

Judge O’Shea was told by Inspector Ronan Kenneally that the defendant was barred from the Tesco outlet involved on the date in question.

However, she entered the supermarket, took the tube of Pringle crisps from a display shelf and proceeded to a self check-out area.

Security staff became aware of the defendant’s presence in the store and walked over to her to make her aware of the fact she was barred.

As they approached, she opened the crisp container in front of them.

“(She said) I opened it so you will have to leave me pay for it,” said Kenneally.

The court was told that, because the packet had been opened and could not be resealed, it could not be offered for re-sale.

Judge O’Shea was told the defendant had co-operated fully with gardaí and flagged her guilty plea at the earliest possible opportunity.

The young woman had recently gotten married and had a history of anxiety problems.

Judge O’Shea said the offence had to be viewed in context against what he termed the defendant’s “Smart Alec” behaviour towards security staff, the fact she opened the Pringle tube after being asked to leave the supermarket and her history of previous convictions.

The judge said her behaviour towards the security personnel on the day was an aggravating factor in the matter.

He noted that a number of suspended sentences imposed in the district court had not apparently been successful for the defendant.

Judge O’Shea imposed a four-month prison sentence but agreed to suspend the final two months in light of her co-operation with Gardaí (Police) and her guilty plea.

Parts of this article courtesy the Irish Independent