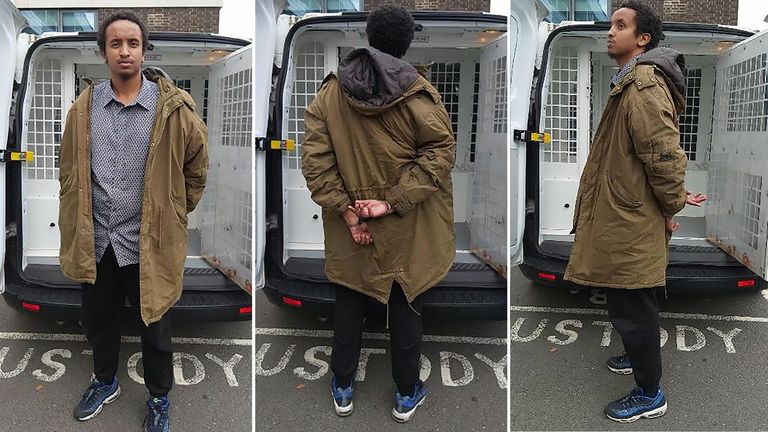 AN ISIS Terrorist who killed a Tory MP in his constituency surgery last year has been found guilty of murder at London’s Old Bailey, with the jury taking just eighteen minutes to come to a verdict.

The jury deliberated for just a matter of minutes on Monday before finding Ali Harbi Ali, 26, guilty of Sir David’s murder and preparing terrorist acts.

ISIS fanatic Ali Harbi Ali refused to stand in the dock on “religious grounds” as the jury foreman returned unanimous guilty verdicts, following a seven-day trial in which Ali admitted carrying out the attack and plotting to kill other MPs including Conservative grandee Michael Gove.

Prime Minister Boris Johnson led tributes today and said: “Sir David Amess was a beloved colleague, public servant and friend who championed the city of Southend in everything he did.”

“My thoughts today remain with (his widow) Julia, the Amess family and all those who knew and loved him.”

LONDON-born Ali, who did not dispute much of the “overwhelming” evidence, will be sentenced on Wednesday for murder and preparing acts of terrorism.

The 26-year-old Islamic State fanatic carried out his attack at the veteran MP’s constituency surgery in Leigh-on-Sea, Essex, on October 15 last year.

Ali told the trial he had no regrets about the murder, defending his actions by saying Sir David deserved to die because he had voted in Parliament for airstrikes on Syria in 2014 and 2015.

The court heard that Ali became known to authorities around this time as his school performance plunged and he was referred to the Government’s Prevent strategy, but continued plotting in secret.

The so-called “lone wolf” sent a manifesto on WhatsApp to family and friends seeking to justify his actions around the time of the attack, and told Sir David he was “sorry” before plunging the knife into him, causing the politician to scream.

The Tory MP died at the scene.

Knife-wielding Ali was later apprehended by two police officers armed only with batons and spray. They have since been handed bravery awards.

Essex Police Chief Superintendent Simon Anslow said: “They’ve basically gone in armed with a stick – something that appears smaller than a deodorant can – to deal with a man that has just committed an absolutely heinous act, still armed with that knife.

“I think it’s an astounding act of bravery.”

Director of Public Prosecutions Max Hill QC said the murder was “the most appalling tragedy”, particularly for the Amess family, and an “attack on democracy”.

He said: “I’m obviously pleased that at the end of what must have been a very difficult trial for Sir David Amess’s family, justice has been served and this individual will now pay the price for his crimes.”

The killing last October came just over five years after Labour MP Jo Cox was killed by a far-right extremist, who was also convicted after an Old Bailey trial.

THE WIDOWER of Jo Cox said the killer of Sir David Amess will “rot in jail and die in ignominy”.

The killing last October came just over five years after Ms Cox was murdered by an extreme right-wing terrorist, who was also convicted after an Old Bailey trial.

In a statement on Twitter, Brendan Cox said: “There was no other possible verdict.

“Like the killing of Jo, all it has achieved politically has been to allow millions of people to learn about David’s decency and the causes he cared about.

“The terrorist will rot in jail and die in ignominy. David’s name will be remembered, especially by the people of Southend who he served.

“Terrorists may cite different ideologies. But what unites them is their desire for infamy, their cowardly attacks on the unarmed and the total failure to advance their cause. All of my thoughts & love are with David’s family today.”

“This was a horrific act of terrorism motivated by religious and ideological beliefs. Ali chose to commit this abhorrent crime for his own selfish and hateful reasons.

“There is no place for terrorism in our society and we will continue to prosecute these acts to the full extent of the law.

“Our thoughts today remain with the family and friends of Sir David. Their pain and suffering do not end with this conviction.”

He tweeted: “Ali Harbi Ali deserves the whole life order (leave prison only in a coffin) he will surely get for murdering David Amess.

“His criminal narcissism took away a good man from his loved ones.”