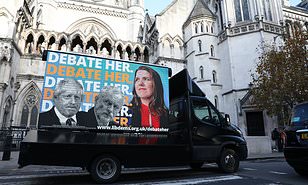 SPOILT Brat Jo Swinson has lost a legal battle that would’ve forced ITV to feature her in a head-to-head Election debate between Boris Johnson and Jeremy Corbyn.

The highly anticipated debate set to air live on ITV tomorrow night will go ahead without the Swinson who tried to brand ITV ‘sexist’ and ‘biased’ over the debate.

At the High Court in London on Monday the Lib Dem’s and the SNP claimed ITV breached impartiality rules.

Two judges ruled the decision could not be challenged and that the party should complain to Ofcom – Britain’s media regulator.

Lord Justice Davis said that there was “no arguable breach of the Broadcasting Code”.

He added: “The clear conclusion of both members of this court is that, viewed overall, these claims are not realistically arguable.

ITV threatened to pull a scheduled interview with Swinson if it lost the high court battle.

The scheduled debate for tomorrow evening between Boris and Corbyn will now legally go ahead.