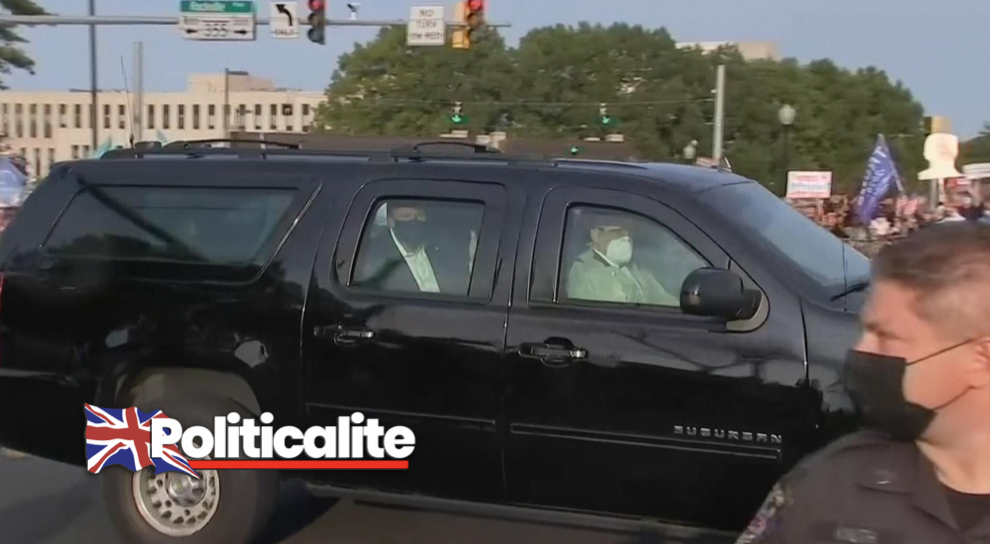 PRESIDENT Donald J. Trump left Walter Reed hospital on Sunday to wave at supporters, despite claims in the mainstream media that he was ‘gravely ill’ needing ‘oxegyn’ to survive.

Depsite this, Mr Trump briefly left hospital in a car to wave to supporters after doctors said he could be discharged as early as Monday.

The president’s journey came shortly after he promised his supporters “a surprise” in a video posted on Twitter.

“It’s been a very interesting journey,” Mr Trump said in the video.

“I learned a lot about COVID. I learned it by really going to school. This is the real school. This isn’t the let’s read the books school. And I get it, and I understand it. And it’s a very interesting thing.” 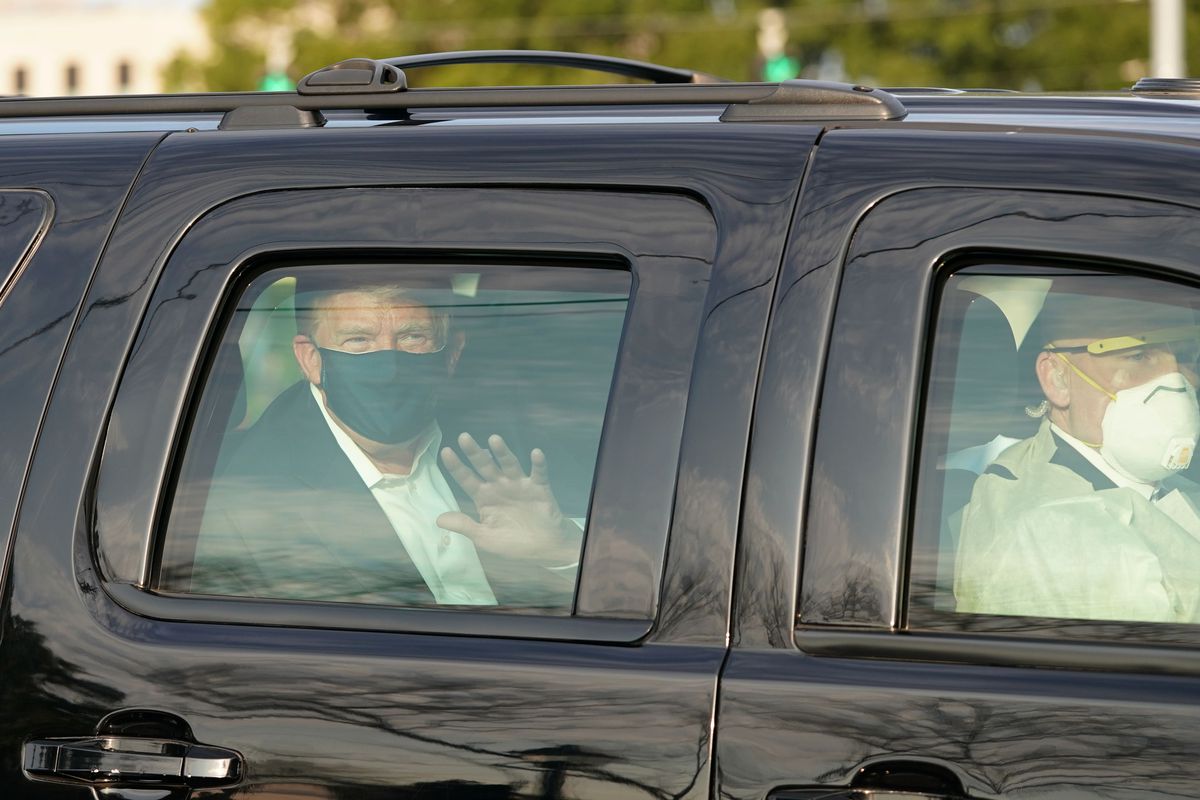 One medical professional inside Walter Reed National Military Medical Centre, where Mr Trump has been treated since Friday evening, questioned whether he had really learned anything.

“Every single person in the vehicle during that completely unnecessary presidential ‘drive-by’ just now has to be quarantined for 14 days. They might get sick.

“They may die. For political theatre. Commanded by Trump to put their lives at risk for theatre. This is insanity,” Dr James P. Phillips, an attending physician at Walter Reed, tweeted.

Every single person in the vehicle during that completely unnecessary Presidential “drive-by” just now has to be quarantined for 14 days. They might get sick. They may die. For political theater. Commanded by Trump to put their lives at risk for theater. This is insanity.

Earlier in the day, Mr Trump’s doctor said the president’s blood oxygen level dropped suddenly twice in recent days, but he “has continued to improve” since then. 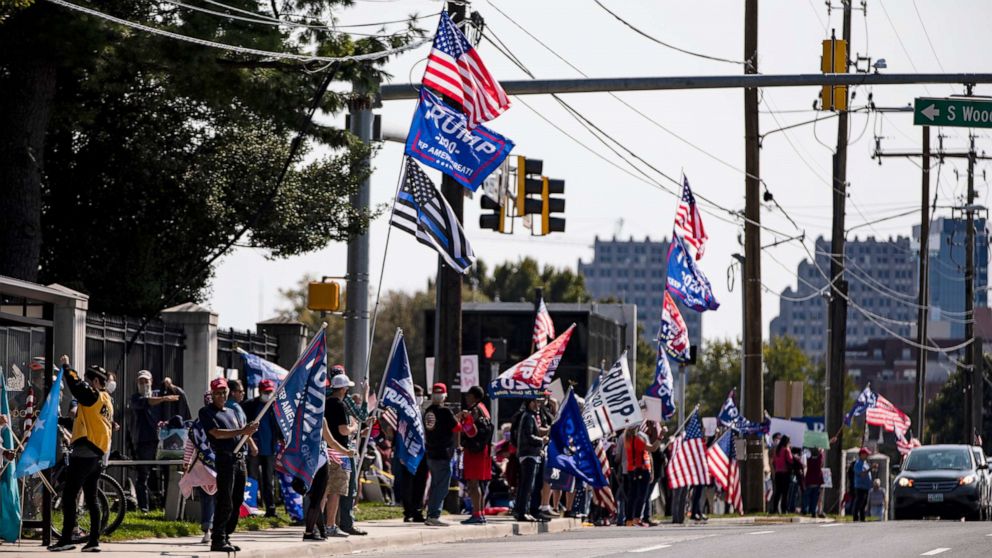 The update from Dr Sean Conley added a new layer of confusion to the president’s fight with Covid-19 as he also suggested Mr Trump could be discharged from Walter Reed National Military Medical Centre as early as Monday.

Mr Trump’s doctors, speaking on the steps of the military hospital where he was being treated for a third consecutive day, refused to disclose the specific timing of the president’s dip in oxygen or whether lung scans showed any damage.

Dr Conley acknowledged he was trying to downplay the severity of the president’s condition the day before. 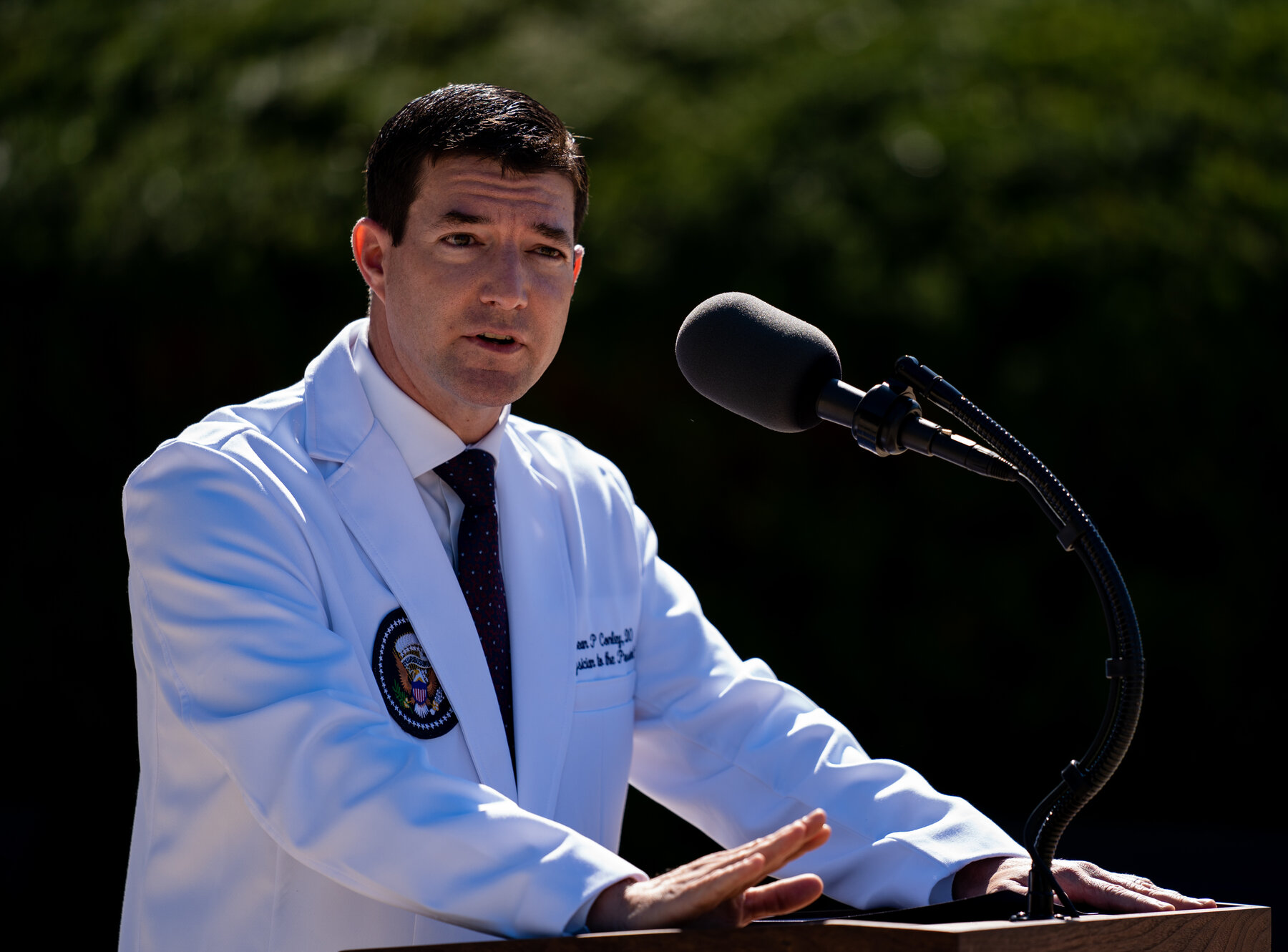 “I was trying to reflect the upbeat attitude of the team, that the president, that his course of illness has had. Didn’t want to give any information that might steer the course of illness in another direction,” Dr Conley said. “And in doing so, came off like we’re trying to hide something, which wasn’t necessarily true. The fact of the matter is that he’s doing really well.”

Dr Conley said the president had a “high fever” and a blood oxygen level below 94% on Friday and during “another episode” on Saturday. He was evasive when asked whether Mr Trump’s level had dropped below 90%: “We don’t have any recordings here on that.”

Mr Trump offered his own assessment of his status the night before in a video from his hospital suite, saying he was beginning to feel better and hoped to “be back soon”.

And he was back on social media early Sunday morning, sharing a video of flag-waving supporters, most not wearing masks, gathered outside the medical centre.

The changing, and at times contradictory, accounts created a credibility crisis for the White House at a crucial moment, with the president’s health and the nation’s leadership on the line.

Moreover, the president’s health represents a national security issue of paramount importance not only to the functions of the US government but also to countries around the world, friendly and otherwise.

Mr Trump’s Democratic challenger, Joe Biden, pulled his attack ads off the air during Mr Trump’s stay in hospital, and on Sunday he dispatched senior aides to deliver a largely friendly message.

“We are sincerely hoping that the president makes a very quick recovery, and we can see him back out on the campaign trail very soon,” Biden adviser Symone Sanders said.

She added: “This is a glaring reminder that the virus is real.”

Mr Biden was at home in Wilmington, Delaware, on Sunday with no plans for in-person campaigning or other public appearances.

Having already tested negative, he is expected to release the results of a new coronavirus test later, and the campaign has pledged to disclose those results and all other future test results for the 77-year-old candidate.

On Saturday, chief of staff Mark Meadows told reporters outside the hospital, “We’re still not on a clear path yet to a full recovery”. In an update on Saturday night, Mr Trump’s chief doctor expressed cautious optimism but added that the president was “not yet out of the woods”.
Meanwhile, Mr Trump’s handling of the pandemic and his own health faced new scrutiny.

His medical care is far superior to the average American’s, with around-the-clock attention and experimental treatments. In the hospital video, he defended his decision to continue campaigning and holding large events during a pandemic.

“I had no choice,” said Mr Trump, who refused to abide by basic public health recommendations, including mask-wearing. “I had to be out front… I can’t be locked up in a room upstairs and totally safe… As a leader, you have to confront problems.”

Mr Trump is 74 years old and clinically obese, putting him at higher risk of serious complications from a virus that has infected more than seven million people nationwide and killed more than 209,000 people in the US.

First lady Melania Trump remained at the White House to recover from her own bout with the virus.

Mr Trump’s administration has been less than transparent with the public throughout the pandemic, both about the president’s health and the virus’s spread inside the White House.

The first word that a close aide to Mr Trump had been infected came from the media, not the White House. And aides have repeatedly declined to share basic health information, including a full accounting of the president’s symptoms, what tests he has undertaken and the results.

Dr Conley declined to say when Mr Trump had last been tested before he was confirmed to have Covid-19 late Thursday.

The White House has said Mr Trump was expected to stay at the hospital for “a few days” and would continue to work from its presidential suite, which is equipped to allow him to keep up his official duties.

On Saturday, Dr Conley said Mr Trump’s blood oxygen level was 96%, which is in the normal range. The two experimental drugs he has received, given through an IV, have shown some promise against Covid-19. 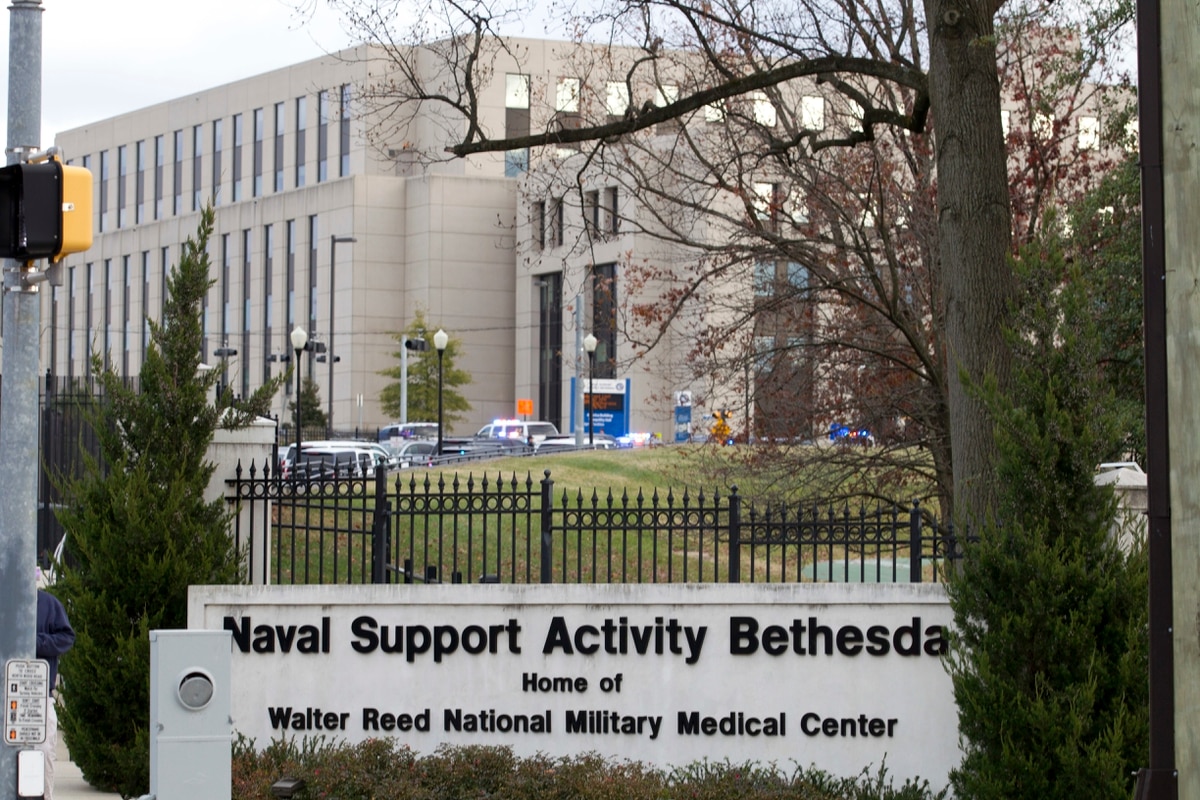 He noted that in many cases, Covid-19 can become more dangerous as the body responds. “The first week of Covid, and in particular day seven to 10, are the most critical in determining the likely course of this illness,” he said.

At the same time, the White House has been working to trace a flurry of new infections of close Trump aides and allies. Attention is focused in particular on the September 26 White House event introducing Mr Trump’s Supreme Court nominee.

That day, Mr Trump gathered more than 150 people in the Rose Garden, where they mingled, hugged and shook hands — overwhelmingly without masks.

There were also several indoor receptions, where Mr Trump’s Supreme Court pick, Amy Coney Barrett, her family, senators and others spent time in the close quarters of the White House, photographs show.

Among those who attended and have now tested positive are: former New Jersey governor Chris Christie, former White House counsellor Kellyanne Conway, the president of the University of Notre Dame and at least two Republican politicians. The president’s campaign manager, Bill Stepien, and the head of the Republican National Committee, Ronna McDaniel, have also tested positive, though they were not at the event.