President Donald Trump took to Twitter and tweeted: “In NYC, looks like another attack by a very sick and deranged person. Law enforcement is following this closely. NOT IN THE U.S.A.!”

CNN reported that the attacker was heard shouting “Allah Akhbar” during the incident, this was confirmed at a press conference moments ago.

The truck crashed into another vehicle after striking bicyclists and pedestrians, the driver then got out of the truck wielding what NYDP later described as “imitation” guns. 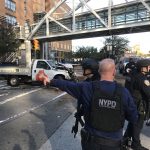 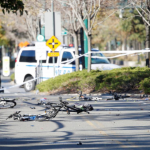 The driver was shot by police before being taken into custody, NYPD said in a post on Twitter.

An NYPD spokesman posted a photo showing a white pickup truck on the bike path with its front end mangled and the hood crumpled. The truck was adorned with logos of the Home Depot hardware store chain.

One eye-witness, John Williams, a 22-year-old student, told reporters at the scene that he heard about five gunshots before seeing a large man with curly being taken into custody.

“He seemed very calm,” Williams said. “He was not putting up a fight.”

The White House is treating the incident as a terrorist attack, two U.S. government officials said according to Reuters.

THIS IS A DEVELOPING STORY – More follows.