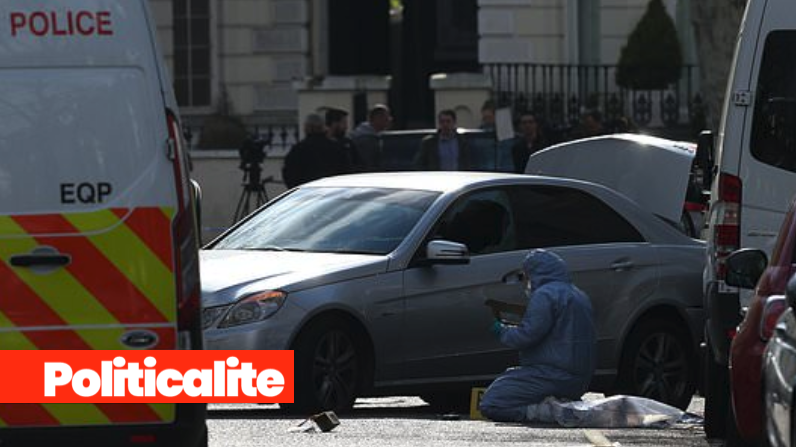 A MAN has been arrested on suspicion of attempted murder after a car was driven at police officers outside the Ukrainian embassy in London.

Police fired shots at the scene in Holland Park in the west of the capital after the Ukrainian ambassador’s car was “deliberately rammed” twice on Saturday morning.

Scotland Yard said a vehicle was driven at officers when they arrived at the scene and a man in his 40s was arrested on suspicion of the attempted murder of police officers and criminal damage.

Police firearms and Taser were discharged in the incident, and the man, who was not injured, was taken to hospital as a precaution and is now in custody at a central London police station. 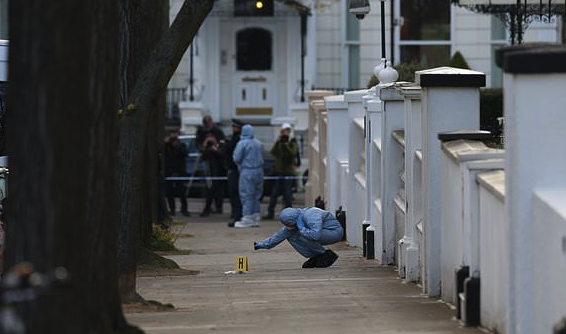 Police said armed officers were deployed to the incident “as part of the protective security arrangements for London”.

The Met said officers were called at approximately 9.50am to reports of anti-social behaviour involving a car in Holland Park.

On arrival, the car was driven and was in collision with a number of parked vehicles near the Ukrainian embassy.

The incident is not being treated as terrorist-related. 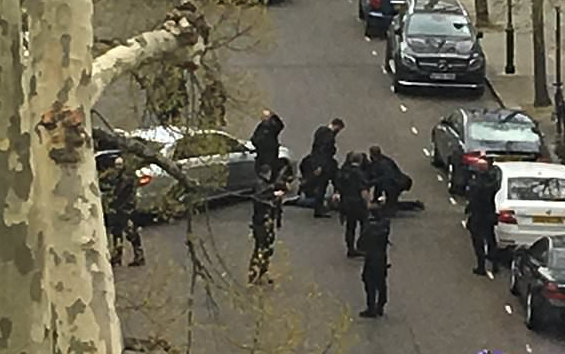 A statement from the Ukrainian embassy said: “Around 10am on Saturday April 13, the official vehicle of the Ambassador of Ukraine to the United Kingdom was deliberately rammed as it sat parked in front of the Embassy of Ukraine’s building.

“The police were called immediately, and the suspect’s vehicle was blocked up.

“Nevertheless, despite the police actions, the attacker hit the Ambassador’s car again.

“In response, the police were forced to open fire on the perpetrator’s vehicle.”

The embassy said no staff were injured.

The Met declined to confirm whether or not ambassador Natalia Galibarenko was in her car at the time.

Onlookers described seeing officers armed with sub-machine guns and a suspect being “wrestled” to the ground.

A silver Mercedes outside the embassy was the subject of a forensic investigation on Saturday afternoon.

The vehicle appeared to have been backed into a black car which was heavily scuffed on its right-hand side.

A window of the Mercedes was smashed and police brought in a sniffer dog to search the area.

A neighbour who witnessed the arrest believes the suspect reversed into the ambassador’s car while backing away from an oncoming police car.

Emma Slatter, who is Visa’s general counsel, watched the scene unfold with her partner David Hinsley, a banker who is also in his 50s.

“We could see two police cars at this end of the road and one about half way down looking the other way,” she said.

“It seems like he was moving erratically or wanting to move away from being boxed in, maybe not realising there were police behind him as well.

“That was when he collided backwards.”

“I think I heard about half a dozen shots,” she said.

The couple fled from the window in case of a stray bullet until the firing was over.

“I could see police had got the guy out of the car and they had him on the ground,” Ms Slatter continued.

“The police seemed in charge. There were probably about eight to 10 guys in full body armour, some with sub-machine guns.

“He (the suspect) was stumbling but he wasn’t resisting. We thought he might’ve been shot but there wasn’t any evidence of any blood.

“They frogmarched him into the back of the police van,” she said, before the suspect was transferred into an ambulance.

Another nearby resident, Heather Feiner, originally from Texas in the US, said: “My kids were hanging out in the living room. They said, ‘Mum, is that firecrackers?’

“I saw all this police activity. I thought, ‘Oh my gosh, what’s going on?’”

The mother-of-two said there were about four marked police cars outside by the time she reached her window in the ground floor flat.

“From the time I heard the shots until I got to the window, which took about 15 seconds, all these police cars were already there,” she said.

“I’m wondering if they were already trying to stop this person.

“I could see a police officer that fired the shots. I could see them pointing their gun at the car.

“They had a guy on the ground. I think he was Caucasian.”

Lois Saint-Pierre, 89, said she was unable to see from her first floor window whether the car had made contact with another, but she also said the suspect was Caucasian.

“I heard the gun go off twice and then they wrestled him (the suspect) to the ground,” she said.

Chief Superintendent Andy Walker, from the Met’s Specialist Firearms Command, said: “As is standard procedure, an investigation is now ongoing into the discharge of a police firearm during this incident.”

The Met said the Directorate of Professional Standards has been informed.