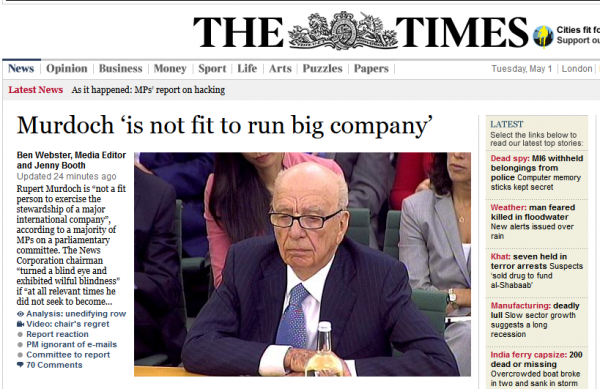 Murdoch, who once helped to fund Politicalite via Sky Bet ads (when we backed the Tories, we was then cut off after we backed Tommy Robinson and UKIP, we were then smeared as ‘Far-Right’) is seemingly rattled at the rise of the purple party and working-class Britain’s support of Mr Robinson.

“Islam is a “death cult” and “the most regressive force on earth”. The prophet Muhammad “was himself a paedophile who kept sex slaves”. Tommy Robinson, the jailed former leader of the English Defence League, is “heroic”. The prime minister’s real name is “Treason May”.

The views of some fringe far-right figure? No: the words of Gerard Batten, the leader of Ukip.”

They claim that UKIP is joining with forces “it once largely shunned to create something not seen in Britain before: a convergence on the hard right.”

Adding: “Eight days ago, in Whitehall, Batten, the “Free Tommy Robinson” movement and British supporters of Donald Trump came together for a rally. The crowd was not that large, but what struck observers was who spoke from the platform.”

They also interviewed David Lawrence, of George Soros, funded Hope Not Hate: “You had people from electoral politics, like Batten; people who made their names online; and others from street demonstrations — and they’re all converging on the same place,” said David Lawrence, of the anti-racism group Hope not Hate.”This is a bigger threat than we’ve seen for some time.”

The paper also claimed that UKIP is ‘radicalising’ Generation Z thanks to prominent right-wing social media activists: Paul Joseph Watson, of the InfoWars, Mark Meechan, also known as Count Dankula, convicted for training his dog to give a Nazi salute; and Milo Yiannopoulos, who they described as ‘a polemicist.’

Jacob Davey, of the Institute for Strategic Dialogue, says these men and others are making a “concerted effort to radicalise Generation Z through the creation of a counterculture”.

Another new ingredient in the wider movement is American money. The Whitehall demonstration, and a similar one last month, were paid for by the Middle East Forum (MEF), a right-wing US think tank that is also funding Robinson’s legal defence.

Kassam added: “I’d like to raise £1m a year for a mass movement organisation — I see how the Americans have done it, from the Tea Party movement to the Trump movement. The left all work together, but we never pick up the phone.”

Kassam said he saw the “Free Tommy” movement as a “litmus test of whether we can galvanise enough people to make an impact on their MPs, or whether we need to start a new political party, or take mass membership of political parties, like Momentum did with the Labour Party”.