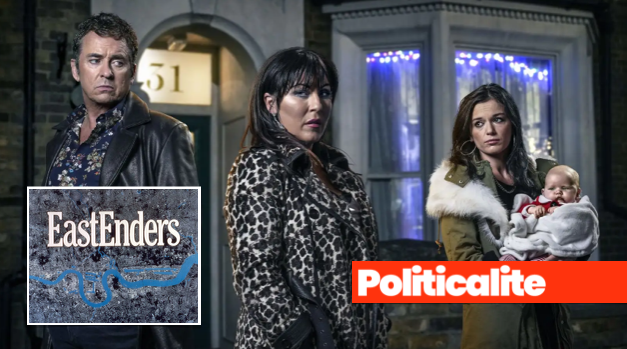 TAX-PAYER funded BBC has been accused of profiting from product-placement on its biggest show, despite advertising being banned on BBC shows.

The licence-fee is set to be raised to £154.50 from April, but does the BBC really need the extra cash it makes extra-income from hush-hush product placement deals?

The BBC’s hit show EastEnders has featured product placement numerous times over the years, and it was obvious during its heydey in the mid-1980s, the BBC was accused of promoting a Mercedes car in 2018, and the show was accused of giving the brand ‘too much airtime.’

The soap is no stranger to ‘raising funds’ from advertising, despite the Beeb being banned from doing so.

In the 1980s, EastEnders allegedly promoted big name brands and it was obvious to viewers watching.

An ex-BBC source told Politicalite: “Back in the Eighties, The Beeb had deals with Coca-Cola, Pepsi, Heineken, Skol, KitKat, Tesco’s, Persil, and even fag brand Benson and Hedges’.

A BBC spokesman hit back at the Mercedes claims last year and said: “EastEnders never gives anyone brand undue prominence, in line with BBC guidelines.”