NORTH KOREA says the U.S is ‘acting recklessly’ after the US Air Force simulated a mock Blitz close to the DMZ* on the Korean Peninsula. 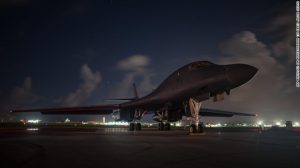 Two U.S. Air Force B-1B bombers, which can carry up to 84, 500-pound bombs dropped dummy bombs on the DMZ in a 10-hour simulation along with South Korean and Japanese Fighter jets. 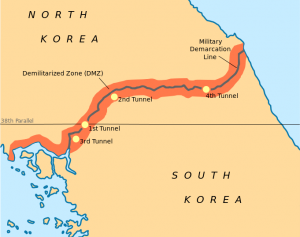 The operation was said to be a ‘show of force’ after North Korea conducted their first successful test of an ICBM (Intercontinental Ballistic Missile) that could reach the U.S. state of Alaska.

The US Air Force said in a statement that:

“North Korea’s actions are a threat to our allies, partners and homeland,” Gen. Terrence O’ Shaughnessy, the Pacific Air Forces commander, said. “Let me be clear, if called upon we are trained, equipped and ready to unleash the full lethal capability of our allied air forces.”

DMZ
The Korean Demilitarized Zone is a strip of land running across the Korean Peninsula. It is the most militarized zone in the world.