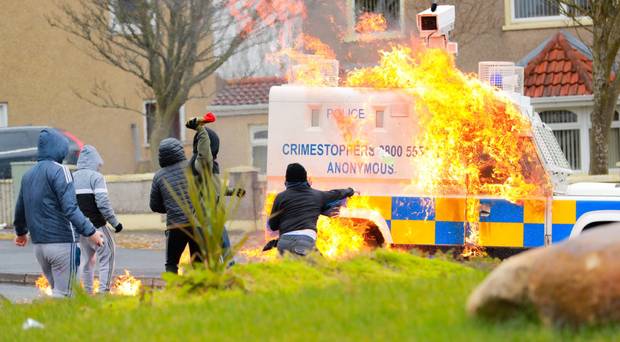 WEAK and unstable Prime Minister Theresa May flew to Northern Ireland on Thursday to tell the deadlocked Northern Irish that her Brexit plan is the ‘best way to avoid a hard border with Ireland,’ defying Tory Brexiteers.

Nothern Ireland is still deeply divided and there is no working regional government and dire economic circumstances that has sparked fresh violence harking back to the troubles.

May will say that: “The economic and constitutional dislocation of a formal ‘third country’ customs border within our own country is something I will never accept and I believe no British Prime Minister could ever accept,”

It is “now for the EU to respond. Not simply to fall back onto previous positions which have already been proven unworkable. But to evolve their position in kind,” she will say.

May who was weakened further after former Home Secretary Boris Johnson delivered a damming Brexit speech in the Commons on Wednesday, Mrs May will try to ask the EU to ‘give ground’ in Brexit talks on Britain’s departure from the bloc.

After quitting the cabinet, former Foreign Secretary Boris Johnson singled out her treatment of the border as the biggest mistake of her negotiations with the EU for a smooth exit from the bloc next year.

Boris told the Commons that May had unnecessarily let the “readily soluble” border issue “become so politically charged as to dominate the debate” pushing May towards a close alignment with the EU he described as a “miserable, permanent limbo”.

After quitting the cabinet, ex-Foreign Secretary Boris Johnson singled out her treatment of the border as the biggest mistake of her negotiations with the EU for a smooth exit from the bloc next year.

The deal proposes negotiating the closest possible commercial links for goods trade to protect businesses and to fulfil a commitment to avoid having infrastructure on the border.