BACK TO THE FUTURE? UK's HGV Crisis Could Be Solved by Trains
Advertisement 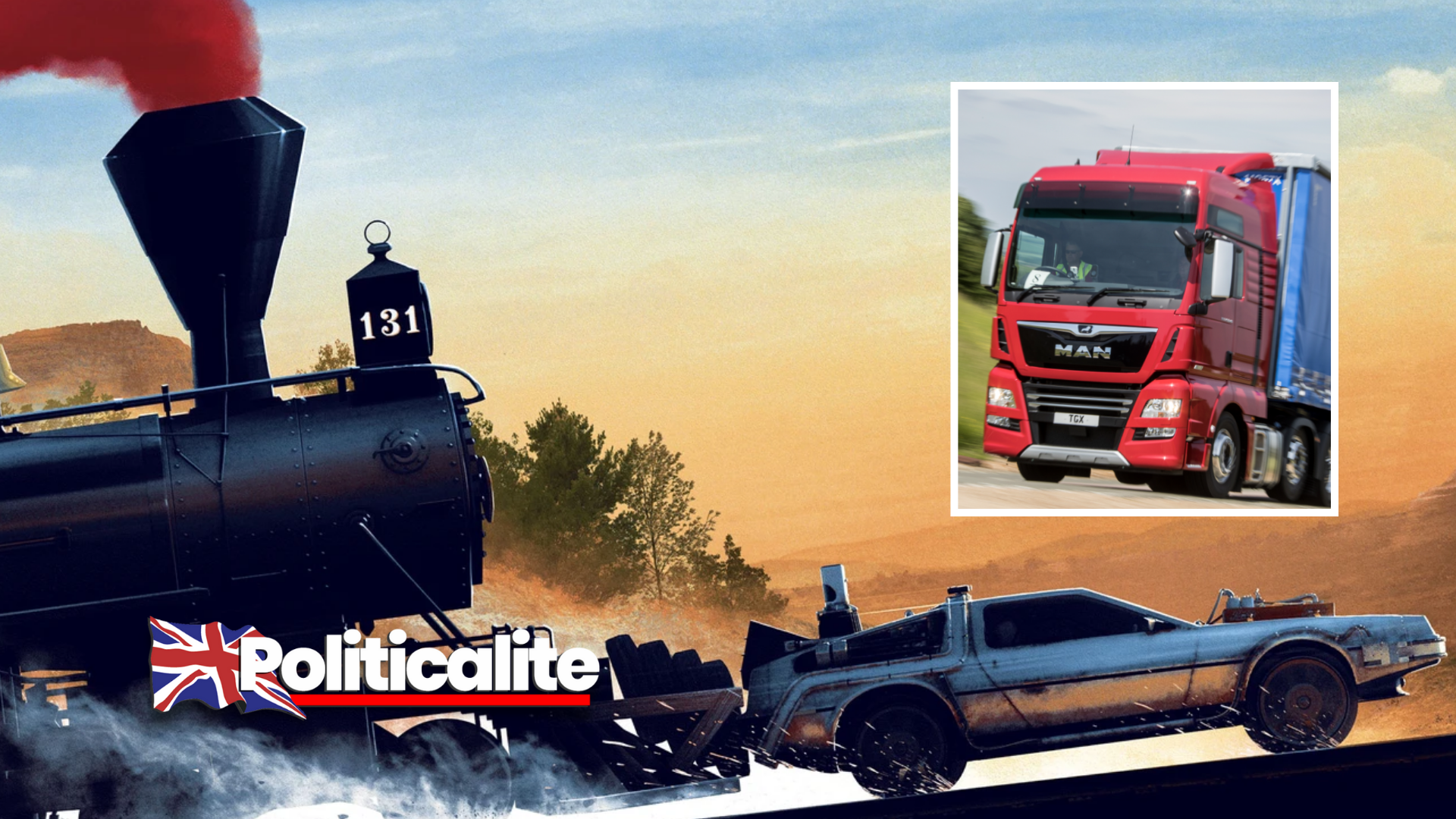 AT THE END of Back to the Future: Part III, Marty McFly’s gas guzzling Delorian was totally destroyed by a train, and that’s what could solve UK supply chain problems that are making the headlines.

“Roads? Where We’re Going, We Don’t Need Roads.” declared the Doc, and if our Ministers put their minds to it, they could solve the crisis, our post-Brexit future is whatever we make it.

Rail industry sources say that they have the solution to Britain’s long-term truck driver shortage, and say it could be a permanent solution to the supply chain shortfall in a radical adjustment to make much more use of rail freight.

That change could be almost immediate, thanks to capacity released by pandemic-reduced passenger travel, and rolling stock now available for conversion.

Simon Walton of Rail Freight UK argues that the solution to the shortage of truck drivers that has resulted in empty shelves at supermarkets doesn’t lie in heavier lorries and higher competition for drivers.

“The truck driver shortage is nothing new to the UK”, says Phil Read of Varamis Rail, one of a cohort of companies seeking to shake up the logistics market in the UK.

“It has been an issue for a generation, and this is really a traffic jam everyone in the logistics chain has seen coming.” Read has been working on a long-distance, high-speed, rail-based alternative to the convoys of trucks that snake up and down the UK motorways.

He says that it doesn’t make any sense to tie up dozens of drivers on long-distance routes, when a train can do the job with much less labour. “Even before Brexit, the reliance on overseas drivers was a known stop-gap that would not shore up the sector in the long term”, he says.

“The generational drift away from the industry, meaning older drivers have been retiring in far greater numbers than new recruits, has left an ever-widening gap between supply and existing demand.”

Rail to eliminate the long-haul

On British roads, and in most of the rest of the world, Heavy Goods Vehicles (HGVs) require specially licensed drivers at the wheel. It’s the HGV that provides the majority of deliveries to supermarkets, retailers and manufacturers around the UK. However, several factors have combined to cause a critical shortage of drivers, that is now impacting on basic supply chain operations. Operators, like Varamis Rail, InterCity RailFreight, Rail Operations Group, and a handful of other train operating companies, are following the market opportunity closely. Some, like Varamis Rail intend to run their own dedicated light logistics trains, eliminating the long-haul that is proving difficult to staff.

70 of these HGVs can be replaced by one intermodal train, but the Road Haulage Association says more drivers will still be needed. This convoy on the A17 is heading from east coast ports, including Felixstowe Photo: David Dixon

In her recent BBC report, Josephine Casserly says historically there were about 60,000 extra drivers needed. Britain had come to rely on a cohort of EU drivers to back up an ageing population of native drivers. Several other factors are also in play. The shortfall of new recruits and Brexit making it difficult for many EU drivers to work in the UK, have combined with the pressures of the pandemic, and rising delivery demand. There are also recruitment, training and examination problems. It makes it easy to see why the Road Haulage Association claims Britain is now 100,000 drivers short of the required 600,000 needed to keep the national truck fleet rolling.

Trunk operations by rail are efficient and convenient

“The significant increase in delivered goods, brought on by the pandemic and other factors, is only serving to make the shortage even more acute”, says Phil Read at his Doncaster HQ. Varamis Rail intends to repurpose electric multiple units to carry light goods between hubs, with last mile delivery by sustainable road vehicles. That’s an idea that has already caught the imagination of operators around the UK. “Varamis Rail is among the companies that see the answer in a complete change of attitude, a logistical paradigm shift to long-haul by rail for light goods. The concept of trunk operations by rail, between efficient and conveniently sited hubs makes perfect sense for the economy”, he says. That shift need not jeopardise jobs in the haulage industry, since the remnant demand will still be enough to soak up the available workforce.

Is moving to rail just shunting the labour shortage issue into a siding. Phil Read says we are marshalling ourselves for a complete shift in attitude to logistics.

Economist Tim Harford, a columnist with the Finacial Times newspaper, says that even if the figures from the RHA are disputed, there is still a clear need for more drivers. The FT’s undercover economist notes that while the RHA says there are 500,000 HGV drivers active in UK, the government’s Office for National Statistics says it is half that number.

The RHA includes all those who are qualified, but not necessarily currently working in the industry. The latter figure may include movie hard-man Liam Neeson, Mr Bean actor Rowan Atkinson, and champion boxer Chris Eubanks, who famously drove his own rig around London for leisure and promotional purposes.

A radical switch to rail

Nevertheless, there is no expectation of HGV drivers retraining quickly to take the throttle in cab of a rebuilt EMU, even if the environmental benefits have been well documented. “It makes obvious sense to use electric traction where possible, in preference to fossil fuels”, says Read of Varamis Rail. “The technology is so much further developed within the rail scenario. While the rail industry has its own challenges to address – including embracing the huge number of potential recruits – there is no doubt in my mind that we can relieve the supply chain crisis sooner rather than later.”

Empty shelves need not be a result of a lorry driver shortage, if the available work force is used more effectively in ‘last mile’ delivery. Rail freight could be waiting in the wings. It may take a radical switch to rail for long-distance deliveries to move back in the necessary volumes. That is something the railway industry has not embraced for half a century, but many commentators say it is something that is about to change.

Parts of this article courtesy of UK Rail Freight.com.