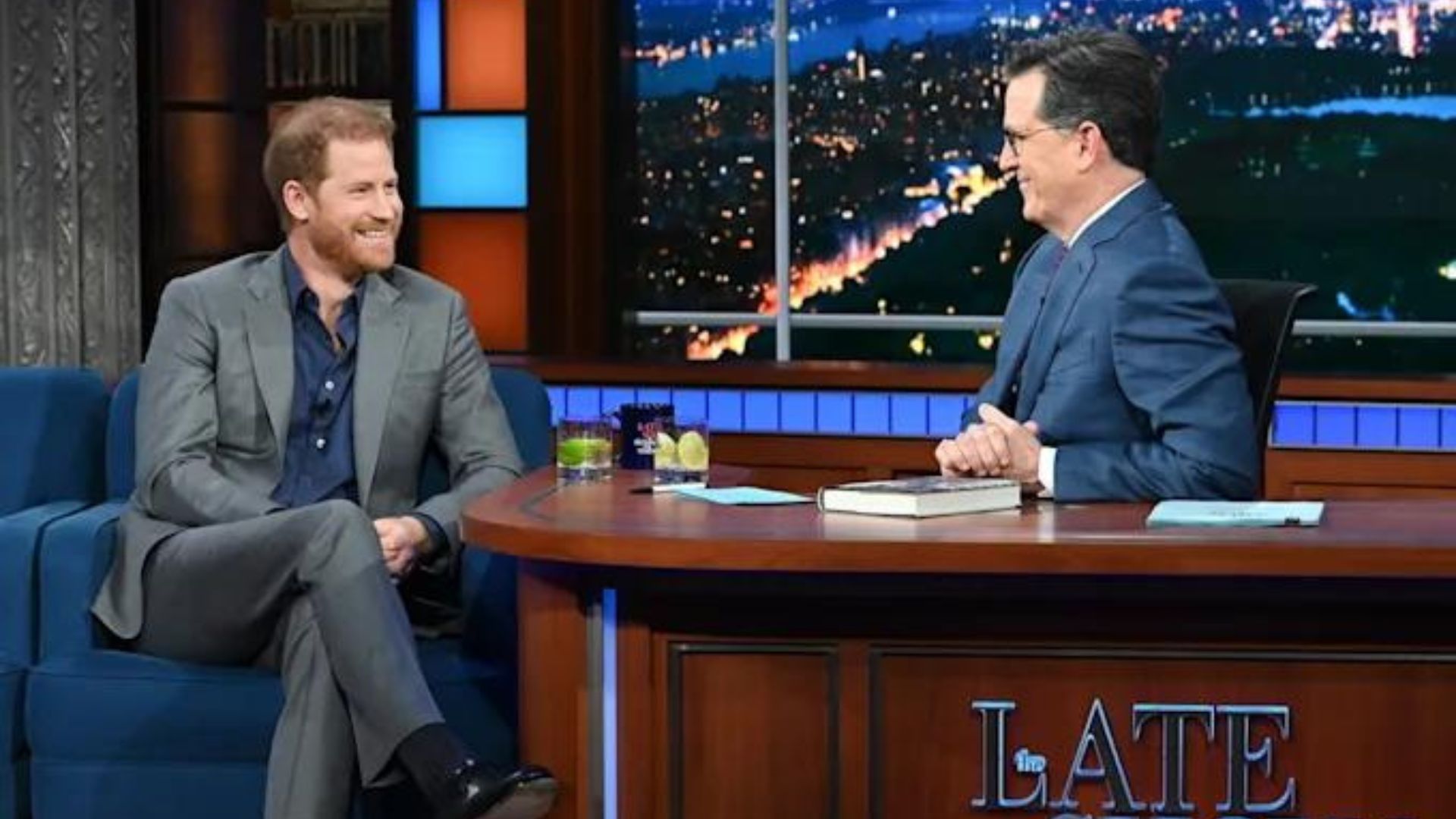 PRINCE Harry has denied boasting about killing 25 Taliban while serving as a soldier and claimed members of his family are in an active campaign to “undermine” his book.

Harry appeared on The Late Show with Stephen Colbert on Tuesday night in the US in which he shared jokes about feeling like he was in “group therapy”, the empty seat next to him being “the spare”, and his “todger”.

There were also some more serious moments on the show, where he said he believed he had seen his mother Diana, Princess of Wales, a “handful of times” after her death, as well as claiming the British press were “abusing” his wife before they left the UK.

The duke said writing his book, Spare, was the “most vulnerable I have ever been in my life”, before adding: “I’ve never felt stronger”.

Harry also said he most remembers his late grandmother the Queen for her “sharp wit” and sense of humour, and that he was “grateful” his grandparents did not have to go through the “global suffering that everybody’s experienced over the last three years”.

The CBS show started with a joke where it seemed as if a red carpet and fanfare had been put on for Harry – before Colbert told the duke it was not for him as Hollywood actor Tom Hanks appeared on camera.

Harry then sat down for the interview to a standing ovation from the audience, as he joked the two chairs in front of him were “the chair and the spare”.

The duke quickly used the prime-time slot to criticise the British press for leaks of his book, saying: “They intentionally chose to strip away all the context and take out individual segments of my life, my story and every experience I’ve had, and turned it into a salacious headline.”

Protests were sparked by Spare, which on Tuesday became the UK’s fastest selling non-fiction book, due to Harry writing he had engaged in “the taking of human lives” while serving as a helicopter pilot in Afghanistan.

“So, my number is 25. It’s not a number that fills me with satisfaction, but nor does it embarrass me,” he wrote.

The 38-year-old told Colbert it had been “hurtful and challenging” watching the reactions following the book’s publication.

“Without a doubt, the most dangerous lie that they have told, is that I somehow boasted about the number of people that I killed in Afghanistan,” Harry said.

He noted the context in which the reference appeared in the book, before saying: “I should say, if I heard any one boasting about that kind of thing, I would be angry. But it’s a lie.

Harry said he was driven to discuss his kills by the goal of reducing veteran suicides.

“I made a choice to share it because having spent nearly two decades working with veterans all around the world, I think the most important thing is to be honest and to give space to others to be able to share their experiences without any shame,” he told Colbert.

“And my whole goal, my attempt with sharing that detail, is to reduce the number of suicides.”

Colbert asked the duke if he believed there was an “active campaign by the rest of your family, by the royal house… to undermine this book”, to which he replied: “Of course, mainly by the British press.”

Asked again if it was “aided and abetted by the palace”, Harry replied: “Yes, again, of course. This is the other side of the story.”

In another part of the interview, the duke said he believed press and public fascination with him and his wife was a way to make Meghan Markle leave the UK and to “break her”.

He told Colbert: “We moved to California and for 12 months during lockdown where we said literally nothing – it was relentless.

“They always knew my wife was going to leave (the UK) because of the way they were abusing her.”

Harry then joked with the audience that the interview felt like “group therapy” after being asked whether the press fascination was designed to make Meghan leave the UK or break her.

Eventually, the duke said he felt like it was “both”.

Towards the end of the interview, Harry was questioned about his trip to the North Pole where his penis was frost-nipped.

Harry asked the CBS host “can I have a drink?” before adding: “How long have you been waiting to ask that question?”

The duke then said: “We’ve taken quite a leap from grief and trauma to my todger.”

Harry then appeared to use an expletive which was bleeped out by the show when describing a piece of equipment he did not have on his expedition to the North Pole.

The Late Show interview caps off Harry’s press run for his headline-grabbing autobiography, which has made its way into the record books with 400,000 hardback, e-book and audio format copies being snapped up.

The book includes claims the Prince of Wales physically attacked him and teased him about his panic attacks, and that the King put his own interests above Harry’s and was jealous of the Duchess of Sussex and the Princess of Wales.

Harry said in an interview that the Duchess of Cornwall was a “villain” and “dangerous”, accusing her of rehabilitating her image at the expense of his.