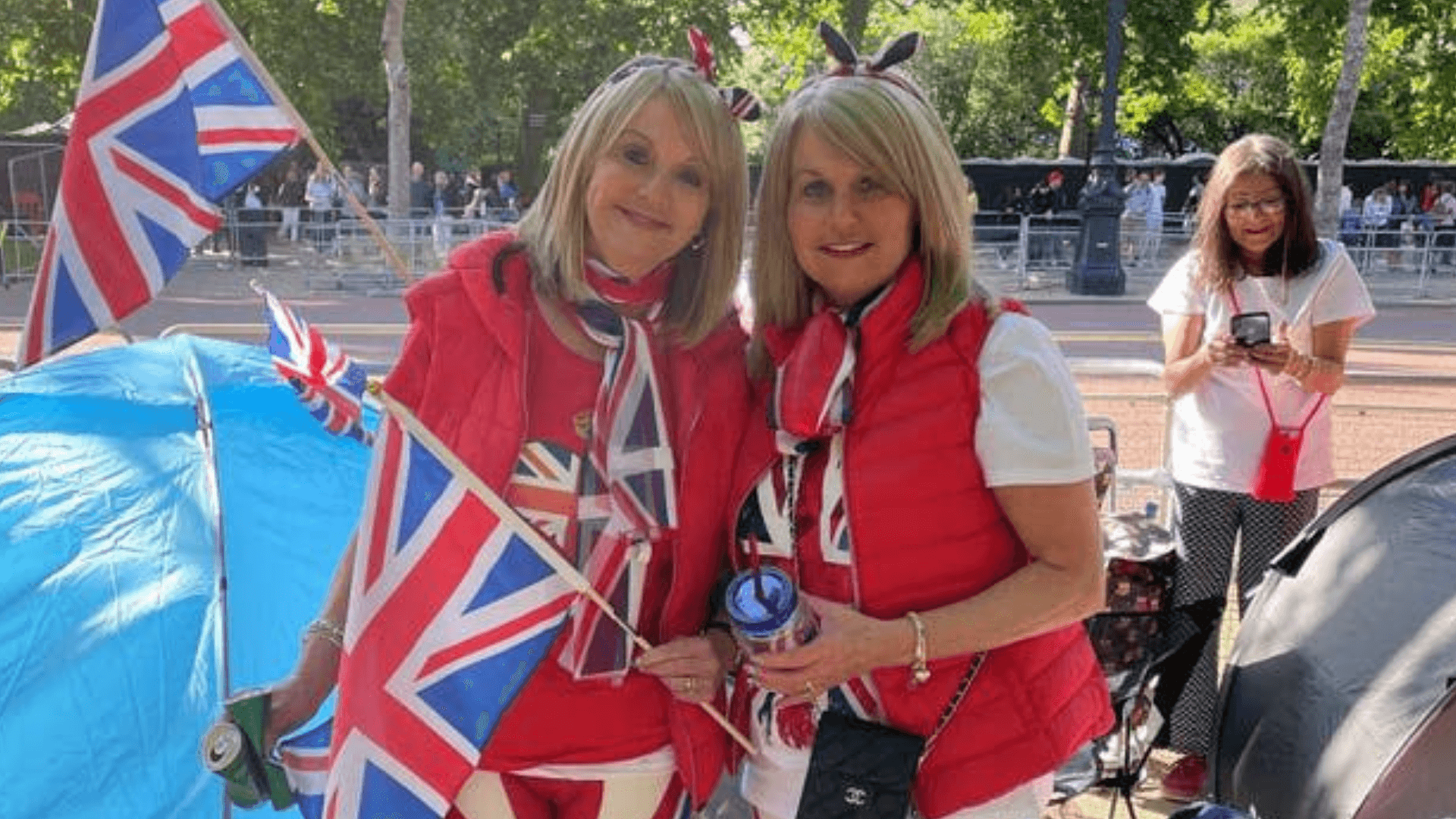 TWIN Royalists are among legions of hardcore royal fans lining The Mall in Central London ahead of the Queen’s Platinum Jubilee.

The 59-year-old Union Jack-clad twins husbands think they are “crackers” for camping out for the upcoming festivities .

Linda Whitfield and Janice Jones originally planned to stay in a hotel after travelling to central London from County Durham for the celebrations, but decided to spend the night on camping chairs instead.

“We’re in chairs as we booked into a hotel and then realised we could get a spot near the front,” Ms Jones said.

Her sister added: “We didn’t intend to but we got so close to the front we thought ‘we’ll never get this opportunity again’.”

Despite their lack of tents, the pair – who were kitted out in identical Union Jack leggings, scarves, hairbands and flags – came prepared.

“We got the dressing gown and slippers out the hotel and some warm clothes and came back,” Ms Whitfield said.

They twins have never camped at royal events before, but said they felt compelled to mark the “remarkable” monarch’s 70-year reign.

Ms Whitfield, a finance manager for a local authority, and Ms Jones, a dental practice manager, took Wednesday off to travel down south in time for the royal festivities.

Their husbands did not fancy joining them, they said.

“They think we’re crackers,” according to Ms Whitfield.

The Queen is set to appear on the Buckingham Palace balcony during the Trooping the Colour.

Ms Whitfield said it is “a bit disappointing” that the campers will not see the head of state from their position on The Mall.

“But we understand, she’s doing her best,” she added.

“We’d just be happy to see any of the royal family because I like them all,” the self-proclaimed royalist said.

Other campers are also there with just chairs, including Minerva Halil, 59, from and Sandra Brabbs, 48, from Yeovil, who said they were planning to walk, dance and drink all night.

Ms Halil, who was wearing a dress that said “keep calm and Jubilee”, has been camping at royal events for 30 years.

Joseph Afrane, who was dressed head-to-toe in Union Jacks, including his suit, shoes, hat and watch, was in high demand from passers-by who wanted to pose for pictures with him.

The 58-year-old, who is originally from Ghana and lived in London’s Battersea, is planning to attend all the official Jubilee events to pay his respects to the Queen.

“She’s doing a great job for the country, commonwealth and the world, so that’s why I’m here dressed up,” he said.