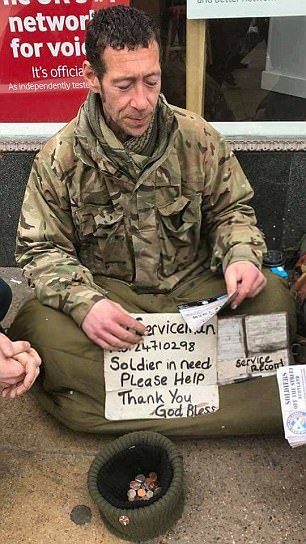 THE DEATH of a homeless veteran has sparked outrage among veterans charities who say more must be done to look after ex-servicemen.

Ex-squaddie Darren Greenfield, 47, who fell on hard times after leaving the Army, died on the streets of Edinburgh just a week before Christmas.

He was a regular face in the Scottish capital as he often spent time sitting on the steps of Waverley train station.

The Who Dares Charity, set up by two former soldiers to help people suffering with PTSD, said: ‘It is a sign of the times that a soldier is left to die on our streets. It is an utter outrage.’

Mr Greenfield had served with the Royal Tank Regiment, the oldest tank unit in the world that is based in Tidworth in Wiltshire.

Friends online said he then transferred to the Royal Army Pay Corps in the 1990s.

This was amalgamated into the Adjutant General’s Corps in 1992.

The news of his death sparked fury among campaigners who are calling for more to be done to help veterans adapt to civilian life.

Yesterday we reported that Military charities said at least 13,000 former soldiers are homeless – a record high.

Tommy Davidson, the secretary of Ancre Somme Association Scotland, said: ‘We are all saddened by the death of Darren.

‘I first came into contact with Darren, probably like many others, when I was shopping in Edinburgh about six months ago.

‘I came up the stairs from Waverley station and I noticed him. Thousands of Scots and tourists would have seen Darren sitting there.

‘We have raised Darren’s death with Mid Scotland and Fife MSP Alexander Stewart to see what can be done to try and get ex-servicemen and women off the streets.

‘We are asking for cross-party support so this issue doesn’t end up as a political football.

‘These people would have given their lives at one point when they were serving, so we should be able to help get them a home and career opportunities.

‘They are highly skilled people…there must be something we can do to help them get back on their feet.’

Ex-infantry sergeant Calum McLeod, who runs post-traumatic stress disorder charity Who Dares Cares, said: ‘It is a sign of the times that a soldier is left to die on our streets.

‘Many people will be angry that a hero was sleeping rough but many more will now be furious that he has been left to die there. It is an utter outrage.

‘The homeless problem will get worse as the forces are downsized and more people return from the campaigns in Iraq and Afghanistan. This is a long-term problem with no easy solution.

‘Our hearts and thoughts go out to Darren’s friends and family at this very difficult time.’

‘We have been supporting him financially since 2000.’

Prison officer Les Standish, who won the Military Medal in the Falklands War, told the Daily Record: ‘The Government have let these people down. These men and women were willing to fight and lay down their lives for this country and the only help available to them is from charities.

‘The Government need to do more for them. It’s a disgrace.’

Mr Standish, 56, a former member of 2 Para who himself was homeless for six months, said he has met hundreds of veterans who are reduced to sleeping in doorways, bus stops and parks.

He added: ‘All of the homeless veterans I met had PTSD and were in need of help.’

A group called Soldiers Off The Street, who said they had reached out to Mr Greenfield, paid their respects on social media.

They posted: ‘Ex-Royal Tank soldier Darren, who sat at the top of the Waverley Steps in Edinburgh, sadly died on December 17 after refusing help from Soldiers Off The Street, SSAFA and others.

‘We tried helping him but we think the streets were his only way of living and coping with life. Now he can rest in peace and fly with the angels.’

Edinburgh South MP Ian Murray said: ‘This is an absolutely tragic story and, once again, highlights the deficiencies in how we treat ex-service personnel when they leave the armed forces.

‘The Armed Forces Covenant was a huge step forward but there are still too many, who risked their own lives for us, falling through the holes in the system.

‘Both the UK and Scottish governments must do more to help brave ex-soldiers like Darren.’

The Ministry of Defence said: ‘We provide extensive help to veterans and their families, including funding the Veterans’ Gateway.

‘The Government are spending more than £1billion to prevent homelessness and rough sleeping.’

Veterans minister Keith Brown said: ‘It’s extremely sad to hear of the untimely passing of a well-known and well-liked member of the Edinburgh veterans community.

‘While the majority of former service personnel transition successfully to civilian life, we recognise that a number will struggle, with some being at particular risk of homelessness.

‘Veterans found to be homeless are legally entitled to housing – but for those with more complex needs, housing alone may not be enough.

‘That’s why the Scottish Government established the Homelessness and Rough Sleeping Action Group and set up a £50million Ending Homelessness Together Fund.’