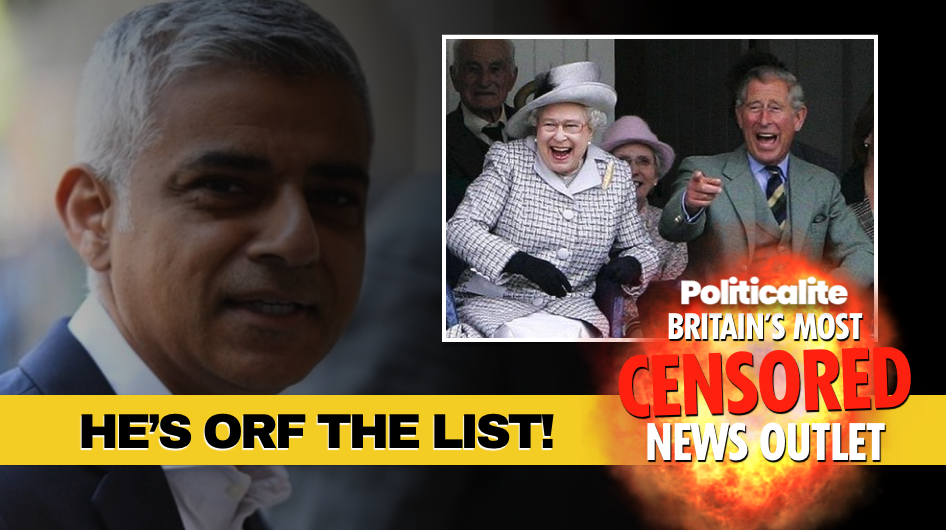 KNIFE-Crime “Mare” Sadiq Khan is set to be snubbed by the Queen during US President Donald J Trump’ State visit to the UK on June 3rd 2019.

The failing London Mayor has overseen a knife crime epidemic that has swept across the capital under his leadership, culminating in record numbers of murders, deaths and stabbings right across London under his weak leadership. 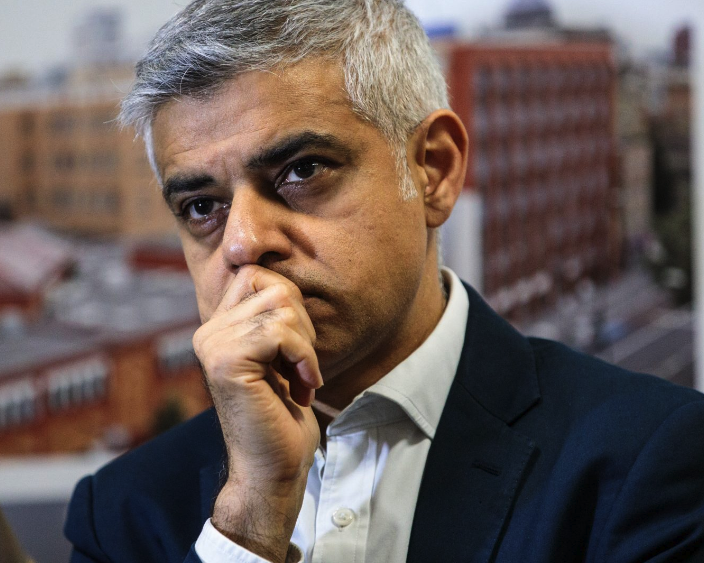 The three day state visit of our closest ally recently announced by Buckingham Palace, has reignited calls from the intolerant left not to allow the state visit to go ahead, with senior figures in the Labour Party, including opposition leader Comrade Corbyn, whose party is pushing for a second referendum, declining an invitation to attend a state dinner for Trump at Buckingham Palace. 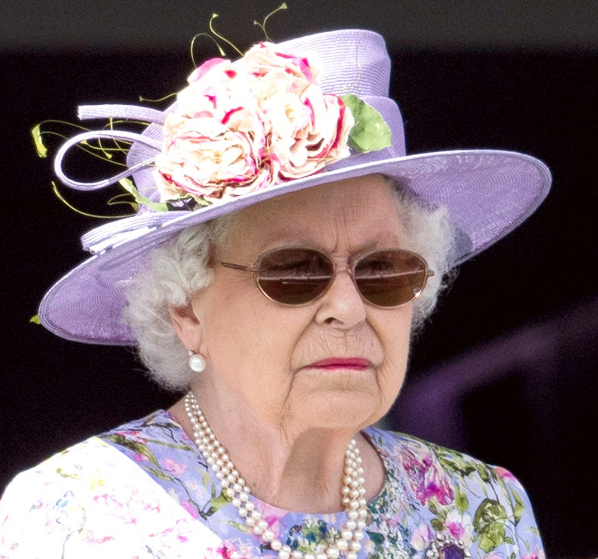 During the three day visit, Trump is expected to commemorate the 75th anniversary of the D-Day landings, attending events in the UK and also in France to acknowledge the end of the Second World War.

With Theresa May’ leadership in tatters over her handling of Brexit negotiations and the Tories taking a pummeling in the local elections suffering their worst local election results since 1995, many senior figures within the Conservative Party are pushing for her resignation. Trump’s timely visit will be welcomed by Brexiteers up and down the country as his stance on the UK leaving the EU has never been clearer.

The Trump administration has reiterated several times its intention and readiness to strike a vast reciprocal trade deal with the UK as soon as it has left the European Union.

Trump is also well aware of the huge financial trade deficit that the US has with EU, something he is also keen to address. The trade deficit between the US and the failing political union is currently around $150 billion, Trump has warned of tariffs on EU imports into America if Jean Claude Drunker doesn’t take invites to the negotiating table seriously and continues to ignore several attempts by the Trump administration to discuss the deficit.

Trump’ invite to Buckingham Palace will take place just weeks after the 45th President was cleared of all wrongdoing in the Democrat Party’s witch-hunt into collusion allegations between the Trump campaign and Russia during the Presidential election cycle in 2016, leftwing orchestrated attempts to implicate the President fell apart after Attorney General William Barr released Special Counsel Robert Mueller’s findings to the public. 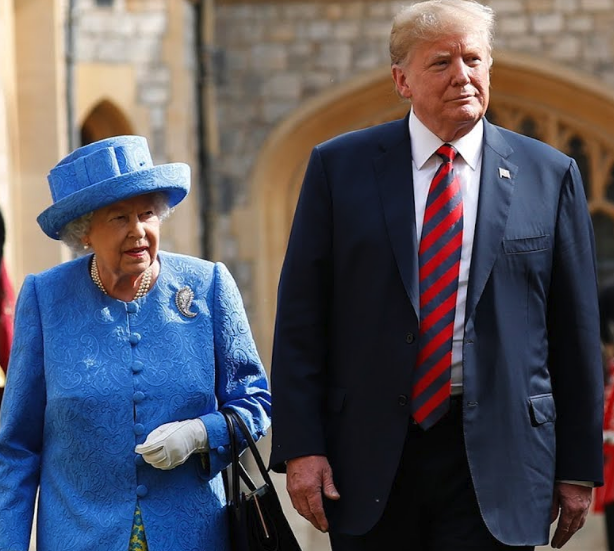 With Trump now in the clear having being completely exonerated of the manufactured hatchet job claims against him, his attentions are now turning to all of those that orchestrated and participated in the plans to create an insurance policy to hold over him in the “unlikely” event that he was elected.

With the potential declassification of the FISA documents looming, Trump is certain to pose serious questions to treasonous Prime Minister Theresa May relating to the involvement of the UK Government and former secret service spy Christopher Steele in the creation of the now de-bunked phoney Russian dossier which was manufactured to discredit Trump and his administration.

The declassification of FISA documents is set to show that the UK Government, Theresa May, former PM David Cameron and former MI6 Intelligence officer Christopher Steele along with their Australian counterparts were all complicit in the creation of the fraudulent dossier that enabled the Obama regime to subsequently spy on the Trump campaign.

Out of nowhere, it now appears that Trump could hold the “Trump cards” when it comes to the UK’s exit of the European Union as he has potential leverage to not only put pressure on the anti-democratic leadership of Theresa May but he could also hold significant weight determining which direction Brexit will be heading in.

So Trump now has the potential to have the best hand in a game that he wasn’t even playing.

Could it be possible now that the master dealmaker holds all of the aces in Brexit negotiations and could determine its direction?

With the offer from the US of a large scale trade agreement already on the table as soon as the UK exits the European Union and Trump wanting to make inroads into the trade deficit with the EU it is possible that Trump could deal a potentially fatal blow to the European Union project by not only helping the UK leave the political union and secure a trade deal with the US but also imposing tariffs on EU goods entering the American economy.

Trump has stated previously that the democratic will of the British people should be respected, he is not a fan of the European Union or their intentions of creating an EU superstate, in-fact, the President opposes much of what the unelected bureaucrats stand for.

He is against the socialist globalist agenda that they push and he believes in independent nation states, nationalism, capitalism and conservatism which are all in direct contradiction of what the European Union stands for and is trying to achieve.

It is not beyond the realms of possibility that Trump is now positioning himself to address the corruption that has been taking place in Europe and the UK for decades in the same way that he has done in the US.

After his election to the highest office in the world Trump vowed that he would “drain the swamp” in the US before reaching out to resolve problems with North Korea, Iran, Europe and the UK.

In an interview with Sean Hannity on Fox News last Wednesday Trump stayed “I have plans to declassify and release. I have plans to absolutely release,” Trump said, adding that he wanted to declassify documents in 2018 but was told by his lawyers not to do it during the Mueller investigation.

“One of the reasons that my lawyers didn’t want me to do it, they said if I do it, they will call it a form of obstruction, so they will say, oh, you released these documents so we would make all of this information transparent,” Trump said of his lawyers advice, declaring, “But at the right time, we will be absolutely releasing it. I did the right thing by not doing it so far.”

The declassification of FISA documents brings the house down on both sides of the Atlantic, Trump has significant knowledge and leverage at his disposal which could potentially influence just how much longer Theresa May is in No.10 Downing Street and which path the UK’s exit from the European Union takes.

The UK has always had a strong relationship with the US and those ties could be about to be strengthened further come the first week of June depending on how Trump plays his hand.

It’s going to be interesting watching what the man behind the art of the deal does over the coming weeks as Theresa May clings on to power by the skin of her teeth and Brexit extensions come and go.

Make no mistake about it though, President Donald J. Trump is going to have a hand in the outcome of both whilst knife-crime mayor Sadiq Khan misses out on a seat at the captain’s table and rallies his Soros funded followers from the sidelines to turn out again in protest at the President’s State visit.