ONES LOVE: Wills and Kate visit Bob Marley home as Jamaicans chant “We love you!"
Advertisement 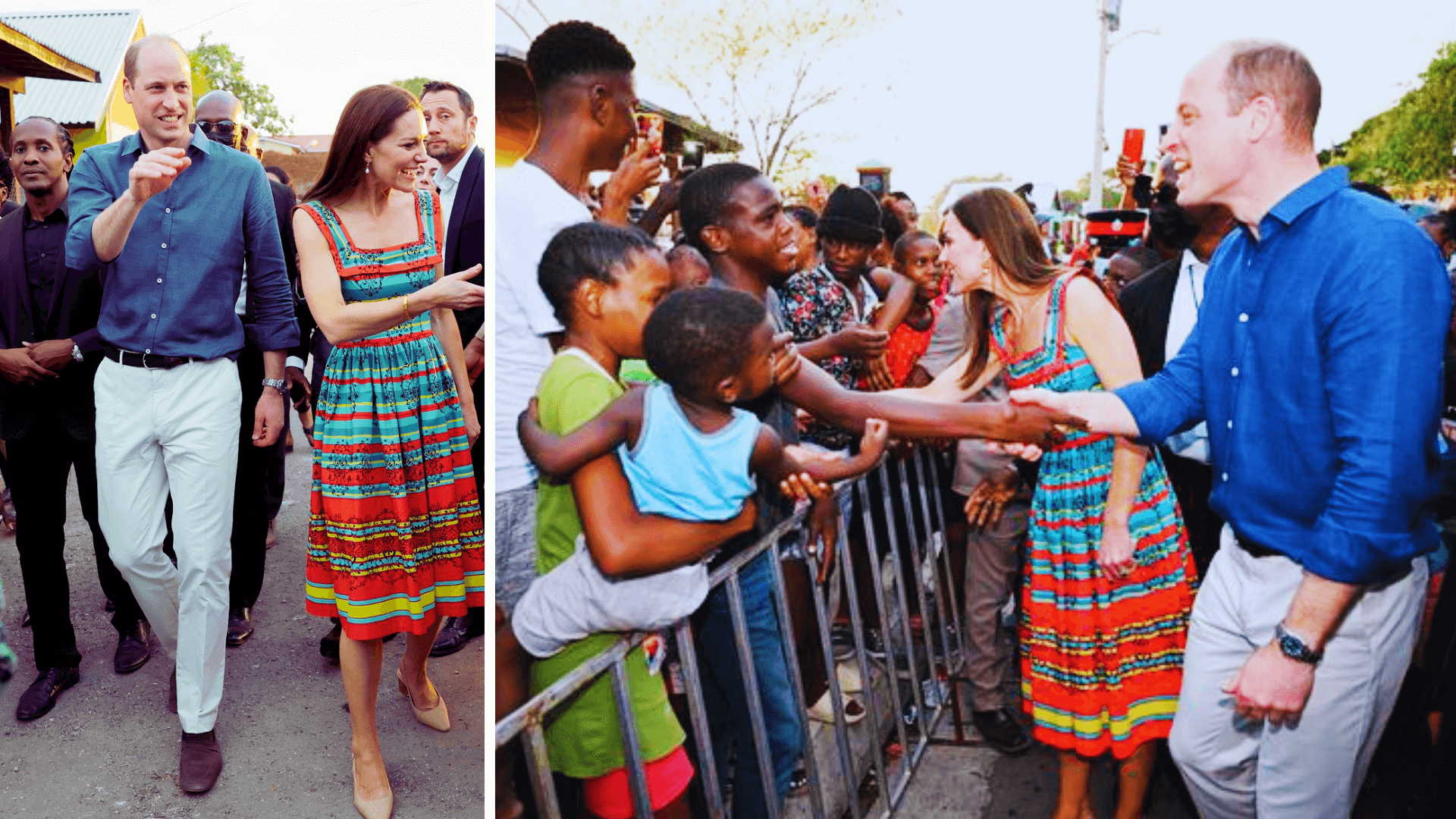 PRINCE William and Duchess of Cambridge Kate visited Bob Marley’s house and met Jamaica’s sporting greats as they arrived in the country amid calls for the monarchy to pay reparations for its role in slavery.

On day four of the royals’ tour of the Caribbean, William and Kate tried out a bobsleigh made for two under the watchful eye of Jamaica’s latest Cool Runnings team before the duke met one of his own footballing heroes.

There was mass hysteria in one Kingston neighbourhood as the royal couple were mobbed by crowds who chanted “We love you, we love you” as they walked to Trench Town Culture Yard and Museum in Jamaica’s capital.

During a visit to music legend Marley’s old Kingston neighbourhood of Trench Town, William clambered into a training sleigh followed by Kate without a moment of hesitation.

Chatting to women and men from the bobsleigh team they talked about the popular movie Cool Runnings which immortalised the 1988 Jamaican Winter Olympics team.

The duke, who is touring the Caribbean with the duchess to mark the Queen’s Platinum Jubilee said: “One of our favourites, ah so good.”

The future king also played with one of his sporting heroes, England and Manchester City striker Raheem Sterling, in a match with local young footballers.

The Cambridges arrived in Jamaica to a much-publicised demonstration calling on the monarchy pay reparations for its role in slavery on the island.

Earlier, protesters gathered at the British embassy in Kingston with placards and accused the monarchy of benefitting from the “blood, tears and sweat” of slaves.

Anti-colonial sentiment has been growing across the Caribbean against the background of the Black Lives Matter movement in recent years, with Jamaican politicians calling for the Queen to be dropped as head of state and for a formal acknowledgement of slavery.

A royal source said the duke was aware of the protests and was expected to acknowledge the issue of slavery in a speech on Wednesday night during a dinner hosted by the Governor General of Jamaica.

In contrast to the angry scenes outside the embassy, during the royals’ Trench Town visit there were screams of delight as the duke attempted to keep up with Kingston-born Sterling.

Those gathered burst into rapturous applause every time the football star touched the ball and gave screams for the duke – some of them ironic – when he fluffed a shot.

Dozens of locals stood behind a wire fence to watch the sporting spectacle unfold and others sat on roofs to get a better view.

The footballer, who was been given special dispensation by England manager Gareth Southgate to travel to Jamaica ahead of the national team playing at the weekend, and the royal were joined on the pitch by a player from William’s beloved Aston Villa team Jamaican Leon Bailey.

The England striker, who was mobbed by the spectators, said about his Southgate: “He said to me an opportunity like is a great one and it’s an experience that will live with you forever.”

He was there as part of his efforts to improve social mobility for young people. His Raheem Sterling Foundation has set out plans to work with partners in Jamaica, Manchester and London to give disadvantaged youths opportunities to break out of poverty.

When William, president of the Football Association, was first taken over to meet Sterling and Bailey, he turned to Kate and said: “Two heroes of mine.

These two are the fastest in the team.”

Later, William and Kate travelled to reggae legend Bob Marley’s home and now a museum, and played drums with some reggae musicians in the courtyard where Jamaica’s biggest superstar learned to perform.

There was mass hysteria in the neighbourhood as the royal couple were mobbed by crowds who chanted “We love you, we love you” as they walked to Trench Town Culture Yard and Museum in Jamaica’s capital.

The visit to Marley’s former home and the brief match was designed as a celebration of the singer’s twin passions.

Marley, who died in 1981 from skin cancer at the age of 36, was a keen amateur footballer who played regularly in Battersea Park when he lived in London. He supported Tottenham and the Brazilian team Santos.

The royal couple were welcomed to Trench Town by Babsy Grange, minister of culture, gender, entertainment and sport, and Mark Golding, the leader of the opposition and MP for the area.

Inside the museum, Sophie Dowe, one of the directors of the attraction, showed them around the courtyard dwellings where Marley and his friends learned to play music.

William said: “So much musical history was made here.”

He and Kate went into the room where Marley wrote some of his best known music. They were also shown around the singer’s sparse bedroom containing a stool and a single bed near a mural on a wall.

Before they left, the couple went into a neighbouring courtyard where a group of reggae musicians were singing Rastafarian nyabinghi chants backed by drummers.

Kate was quickly coaxed into trying out a drum but William took more convincing before joining in a royal jamming session with the singers and other drummers.