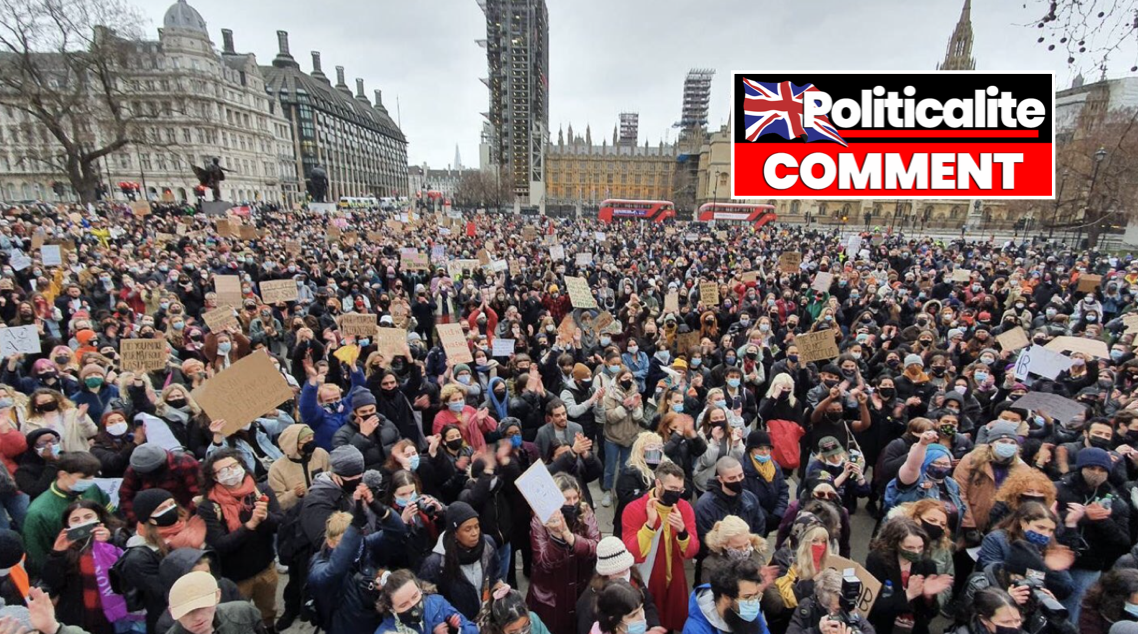 LAST night Prime Minister Boris Johnson told reporters that he was “deeply concerned” and “committed to reviewing” the violence that has recently been enacted onto women and gender non-conforming people at the hands of the police.

If Boris is serious about ending violence against women, he will halt the Police, Crime, Sentencing and Courts Bill.

As the actions of police at peaceful vigils this weekend show, police abuse the powers that they already have – and yet the government plans to give them more powers in the Police, Crime, Sentencing and Courts Bill.

The death of Sarah Everard must be seen in context of the structures of violence against women in this country, which include the police who brutally manhandled grieving women on Saturday, and the routine failures of the police to investigate rape cases as well as their own record of domestic abuse against women.

Under the Conservative Party, deaths from domestic violence have reached a 5-year high with 173 people killed in 2018 – up from 32 in 2017. 3 people a week are now killed by a partner, ex-partner or family member. Spending on domestic violence refuges has been cut by nearly a quarter (24%) since 2010. Only 1.4% of all reported sexual violence is prosecuted.

The current ‘tough on crime’ approach does nothing to improve the lives of victims of violence, and it protects police officers from accountability. In 2019, a Bureau of Investigative Journalism report found that police are treated differently in abuse cases.

For police, 3.9% in England and Wales ended in a conviction, compared with 6.2% among the general population.

Evidence from charity Women in Prison shows Black, Asian and minority ethnic women are more likely to be overpoliced, criminalised and receive disproportionately harsher treatment if this Bill passes.

The powers introduced by the Police, Crime, Sentencing and Courts Bill will also empower police to decide where, when and how citizens are allowed to protest and have their voices heard by those in power. It will also increase penalties for those breaching police conditions on protests. The right to protest is essential for all people, and especially survivors of violence, to hold powerful institutions accountable.

Boris we don’t want your concern, we don’t want more reviews, and most importantly we don’t want any more laws. Too many people have already died at the hands of the police and the current government, and we need radical change.

From April 2015 to April 2018, there were almost 700 reports of domestic abuse against police officers

There have been 1,500 allegations of sexual misconduct against police officers in the last six years

Only 1.4% of sexual violence offences are prosecuted

Between the start of 2012 and 2 June 2018, a total of 562 officers were accused of sexual assault and only 43 faced subsequent proceedings,

In 2019, a Bureau of Investigative Journalism report found that police are treated differently in abuse cases. For police, 3.9% in England and Wales ended in a conviction, compared with 6.2% among the general population.

Prosecutors have been urged to drop “weak cases”