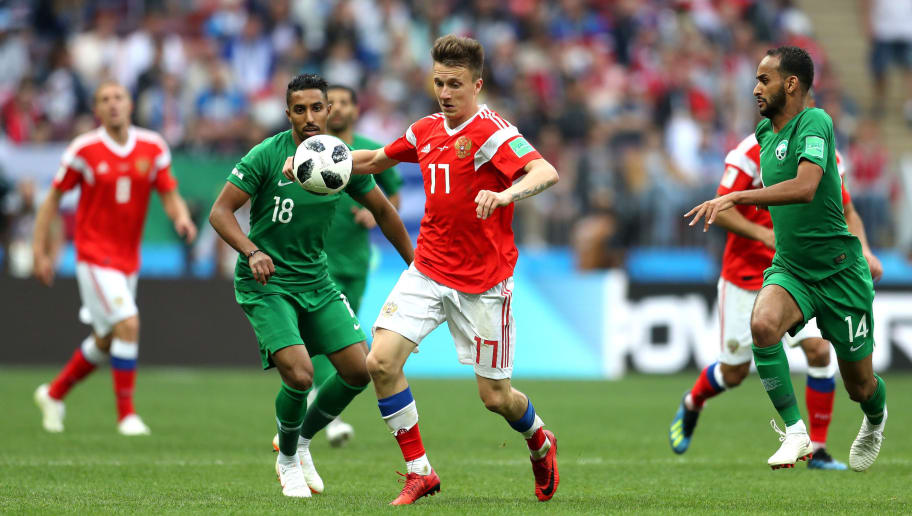 THIS match was more one-sided than a beheading, and Saudi Arabia should know; they carry out an average of 150 of them a year. The game started off sloppier than a moss-side brothel, amateur tackles and throw-ins galore, but this was to be expected from two of the lowest ranked teams in the tournament. There was a call for handball early on, with the Saudi Arabian fans shouting not just for a free kick but for the hand to be chopped off altogether.Then the Russian Gazinky scored, ironically enough, with a header, getting one back for heads everywhere. Substitute Cheryshev, looking like something straight from the Viper Room Suite, netted a second shortly before half time. The beginning of the second act was slow and laborious, feeling more like a training exercise than the opening game of the biggest sports competition in the world. However, another sub, Artem Dzyuba, netted another via his sally then Cheryshev scored yet again. Finally, the ref screamed for a free kick and half the Saudia Arabia team looked around for a cheating woman before realizing he meant it in terms of the game and not in the usual capital punishment way.Overall, a slow game but one filled with goals and in the end entertaining. It was just good to see Russia and a middle eastern country competing over something that didn’t involve a half scorched oil field.  And as a bonus, the whistle blower in this instance was not poisoned for espionage.

So Russia, the hosts, go straight to the top and it will be interesting to see how they get on when they play against a team with actual talent. Unfortunately, with the group they’re in, well have to wait for the knock-out stages.

Egypt 0 1 UraguayThe ancient Egyptian empire spanned 40 centuries, built a structure the size of 16 empire state buildings and invented one of the most complex languages in human history with an alphabet of 700 hieroglyphs. What would they make of their descendents, who could not even score one goal against Uraguay in a sports competition?The only cameo of Egypt’s star player, Salah, was of a resigned victim-faced millionaire glaring bitterly from the side lines, and who’s to say how different the result might’ve been had he played? Uraguay’s superstar, retired cannibal Luis Suarez, would have given a better performance had he been sitting on the shitter back at his mansion; he gave possession away as if he’d been bribed to do so and had a cringe-fest of a an outing.Apart from a woodwork incident the game was peppered with half-arsed tackles and soulless attempts on goal until Giminez skulled one in just shy of the 90th minute. Overall a vacant experience watching this prank of a game; Egypt will not be building any more pyramids for quite some time.Germany 0 1 MexicoThis result was more unexpected rhan finding out the CIA faked Hitler’s death and shooed him off to Argentina where he lived a long happy life til his death in the late 70s. 7 of Germany’s starting 11 were 28 or over, so its no surprise that they weren’t ready for Mexico’s energetic counter-attacking and this culminated in Hirving Lozano’s first-half goal.Unlike many of the death camps of World War Two, the remainder of the game was give and take from both sides, but Germany couldn’t penetrate the Latin net despite Julian Brandt striking the post.However, Germany laid siege, calling forth memories of Stalingrad, to Mexico’s penalty area in the final 20 minutes but were fended off by the brilliant Guillermo Ochoa (not to be confused with the fantastic Ochoa gangster of Medellian Cartel fame), and when the whistle blew there was nothing short of ecstasy from the Mexican crowds who must’ve felt like they just smashed open the grandest pinata of all time. It was even reported that the South American fans set of seismographs with their rampant celebrations.There’s high hopes for Mexico going forward but a lot of awkward questions for Germany in the coming weeks. Well, if they could do it Nuremberg, they can do it in Russia.

RUSSIAN ULTRAS: England fans will be safe… we’re bored of beating them up