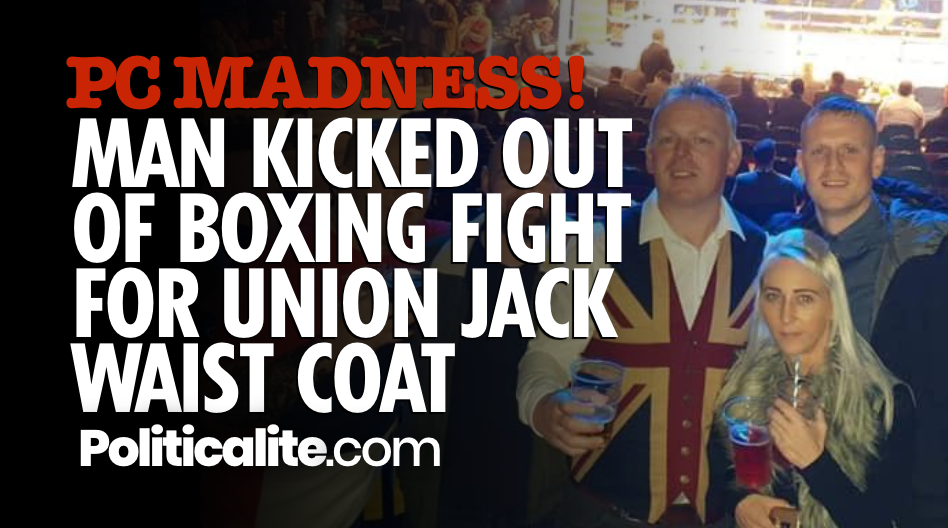 FURY erupted last night at the Manchester Arena during a world title bout between two BRITISH boxers after a patriot was KICKED OUT by security staff for wearing a Union Jack waistcoat.

The Leeds Warrior Josh Warrington successfully defended his belt against Northern Ireland’s Carl Frampton in a thrilling encounter which saw the underdog from Leeds power his way past the Irishman to retain his belt and the world title. But there was an incident in the crowd at the 25,000 seater stadium which was closed for a period last year after a Muslim “refugee” murdered and maimed dozens of innocent children at an Ariana Grande concert in one of BRITAIN’s worst terrorist attacks.

Over a year on from the devastating attack, political correctness and appeasement was in full flow inside the arena as a boxing fan was asked to remove his Union Jack waistcoat as it might “offend” someone or cause “offence” In what can only be described as a disgraceful attempt to curb nationalism, Showsec security employee’s were seen surrounding the man insisting he removed his patriotic garment. 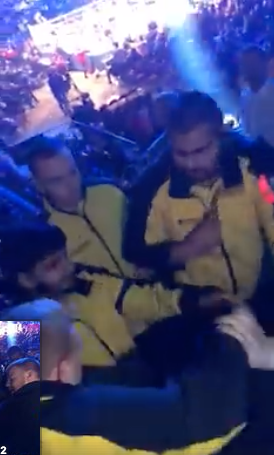 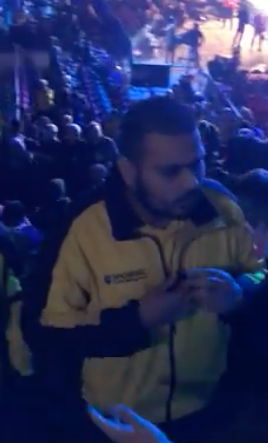 One boxing fan was overheard asking the unpatriotic security staff “how can the flag of your home country be deemed offensive in one of the largest cities in the UK”? “How can a Union Jack been seen to be offensive during a World Title fight between two British fighters on home soil”?

<blockquote class=”twitter-tweet” data-lang=”en”><p lang=”en” dir=”ltr”>Ive been Violently Thrown out Manchester arena for wearing a Union Jack ?? Waistcoat,apparently this is an offence here is photo of the offensive item.handed over the offensive item but was told I had to leave premises, what sort of a country do we live in <a href=”https://twitter.com/hashtag/FramptonWarrington?src=hash&amp;ref_src=twsrc%5Etfw”>#FramptonWarrington</a> <a href=”https://t.co/fx7hdLSrT5″>pic.twitter.com/fx7hdLSrT5</a></p>&mdash; Tracy Baxter (@tracylvsjames) <a href=”https://twitter.com/tracylvsjames/status/1076594074017320961?ref_src=twsrc%5Etfw”>December 22, 2018</a></blockquote>
<script async src=”https://platform.twitter.com/widgets.js” charset=”utf-8″></script>

The same patriotic gentleman had been asked by BT Sport for permission to film his eye catching patriotic waistcoat in Los Angeles earlier this month during the Tyson Fury bout against Deontay Wilder but it was clearly evident that Manchester Arena and Showsec security were having none of it, later ejecting the man and his patriotic boxing fan companions from the packed out arena. It’s hard to comprehend that just last year the city of Manchester came together in support of the victims of a barbaric and cowardly terrorist attack committed by a Muslim “refugee” that was welcomed into the country to seek refuge and to create a better life for himself in the city, yet a year down the line in the same arena, people who once talked of inclusion, tolerance and togetherness are now intent on causing division and don’t appear to be very inclusive, tolerant or together when it comes to support of our great nation.

It should never be deemed racist or offensive to proudly display the flag or colours of the country you were born in, especially under circumstances like these where boxing fans were supporting boxers from the British Isles, within the British Isles, these deliberate attempts to curb nationalism in favour of globalism should be fought and conquered at all costs. It’s time we KO’d political correctness and appeasement once and for all. If the flag, colours or emblems of this great country offends you then I suggest you find somewhere else to reside.