DEATH OF A WARMONGER: John McCain Was NO Hero, He BEGGED For Multiple Wars Across The World
Advertisement 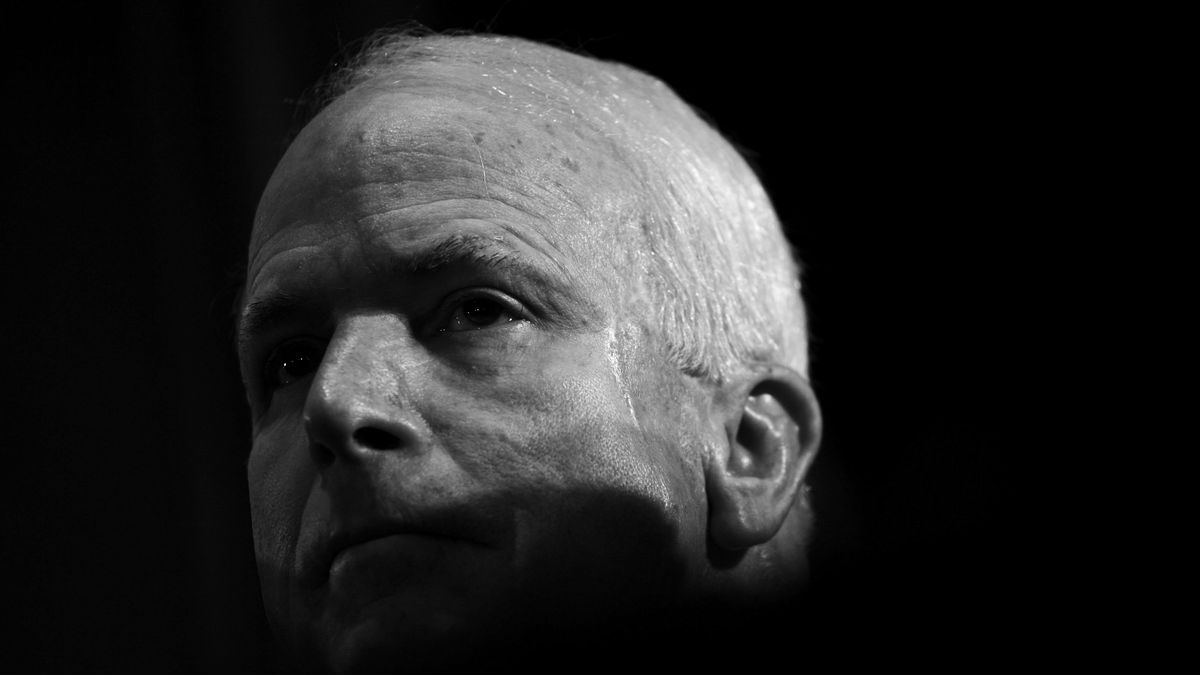 US Senator John McCain died from brain cancer this weekend, whilst the Globalist Establishment is sending out their regards, a U.S. website, Geopolitics Alert compiled a list of wars the U.S. Senator called for.

The list is, of course, a history of all the instances McCain has called for US-led intervention around the world. There’s clearly a long history, and Geopolitics Alert has compiled the most blatant examples from Europe to Asia. We’ll start with the obvious wars first.

Obviously, every US Senator (besides California’s Barbara Lee) voted to give President George W. Bush the power to invade Afghanistan following the events of September 11th. However, McCain wasn’t happy with just moving to invade Afghanistan. No, he had other targets on his mind as early as the day after the towers fell.

Despite McCain’s claim in 2014 that “the Iraq war probably wouldn’t have happened” if he had won the 2000 Republican primary and the general election, this assertion seems ridiculous. On September 12th, 2001, McCain appeared on MSNBC presenting an extensive list of countries he felt were providing a “safe harbor” to groups like al Qaeda. This list, of course, included Iraq and several other nations that appear later on this list.

Another country on that 2001 list (of course) was Syria. Now, the Bush regime may have never gotten a chance to continue toppling Mideast countries (thanks to the failure in Iraq and the exposure of that war being sold on lies). But McCain seemingly never lost sight of his hatred for Bashar Al-Assad.

Shortly after the Arab Spring “broke out” in Syria, McCain – and his constant partner in war crimes Sen. Lindsey Graham – quickly found communication channels with the “Syrian opposition.” Just a few short months after the US endorsed protests in Syria (even having their ambassador attend), McCain and Graham began calling for arms to start flowing to the Free Syrian Army and other “rebel” groups.

McCain’s plans for Syria never quite worked the way he wanted, but he probably should’ve known they would never yield a positive result. If McCain didn’t want to look at Iraq to prove that point, he had another more recent example he could’ve used: the NATO intervention in Libya.

It was less than a year before McCain wanted to arm Syrian takfiris that he had supported with the bombing and no-fly zones in Libya. McCain even wanted tougher actions against the country. Which has now become an anarchic Wild West that’s home to all sorts of horrors from the Islamic State to a new slave trade.

McCain is also a champion of the “war on terror” in other parts of Africa. While McCain hasn’t directly supported terrorists in some countries in Africa, he still has called for more US intervention across the continent.

This list includes countries dealing with Islamic insurgencies, such as Mali. McCain has also called for plans like “deploying Special Forces” to rescue girls kidnapped by Boko Haram in Nigeria and intervention in Sudan, where McCain and his wife have invested money for some time.

Another country on the list of hated nations initially put forth by Bush undersecretary of defense Paul Wolfowitz, and also another longtime target of McCain is, of course, Iran.

Although McCain has always said “he prays” there will never be a war with Iran, the man incessantly calls for it and even jokes about bombing the country when he feels the mood is right. The truth of the matter is, McCain’s positions towards Iran are so hostile that even flagship neoconservative institutions like the Cato Institute think he is too hawkish.

But McCain isn’t satisfied with just backing Salafi jihadists in the traditional Middle East and North African theaters. He’s also backed violent radicals across the fringes of Europe. This trend actually started in the mid-1990’s when McCain was a vocal supporter of then-president Bill Clinton’s war in Bosnia.

Many Muslims traveling to Bosnia joining the mujahideen there have since joined groups like IS in recent years. And IS flags can occasionally be seen in the Sunni areas of Bosnia now. McCain was still backing potential Takfiri movements, recently accusing Russia of interfering in local affairs, and calling for more US intervention in the country.

McCain made similar decisions when he advocated US intervention in Kosovo in the late 90’s. In the Kosovo conflict, McCain backed the Kosovo Liberation Army: a genocidal jihadist organization with ties to Al Qaeda under Osama Bin Laden.

Don’t be fooled into thinking that McCain only supports jihadists in Eastern Europe! He also backs the overt Nazis acting as death squads for Kiev in the ongoing Ukrainian conflict.

This, of course, started in 2014, but McCain has continued to pledge support for Kiev’s crimes in the Donbass region to this day. This is all par for the course in McCain’s larger theme of challenging Russia– the country he believes controls the separatists in eastern Ukraine.

The story of McCain’s hatred of Russia spans back to the Cold War. We won’t get into McCain’s fear of communism that’s evolved into just general Russophobia. But we will say he didn’t have many excuses to focus on making threats towards Moscow for a good 15-20 year stretch.

This changed in 2008, with the war in South Ossetia between Georgia and Russia. During this conflict, McCain was the loudest voice saying the US “should immediately call a meeting of the North Atlantic Council to assess Georgia’s security and review measures NATO can take to contribute to stabilizing this very dangerous situation.”

This same situation repeated in Ukraine in 2014 but McCain’s worst comments came this year. As soon as the US Intelligence Community’s accused Russia of interference in the 2016 US elections– and without any evidence– McCain was first to say the event was an “act of war.”

The Democratic People’s Republic of Korea (DRPK/North Korea) was also an early target of McCain’s making his September 12th wish list. More recently though, the restyled “Trump opponent” McCain was all-in on the new regime’s saber rattling. Calling on Trump to strike the nuclear-armed country.

China is kind of in its own class with McCain, who’s made strange, vague threats towards the country in the past. Such as “the Arab spring is coming to China,” whatever that means. China may be a target on the periphery for McCain, but he does still encourage antagonizing the country to this day. Calling for things like more “freedom of navigation drills” and other naval exercises in the South China Sea.

So, in summation, next time someone asks why you don’t care about John McCain’s clock running out, show them this article. McCain has encouraged the spread of death worldwide. The day he leaves Congress will be a victory for the human race.

This article is courtesy of The Free Thought Project.