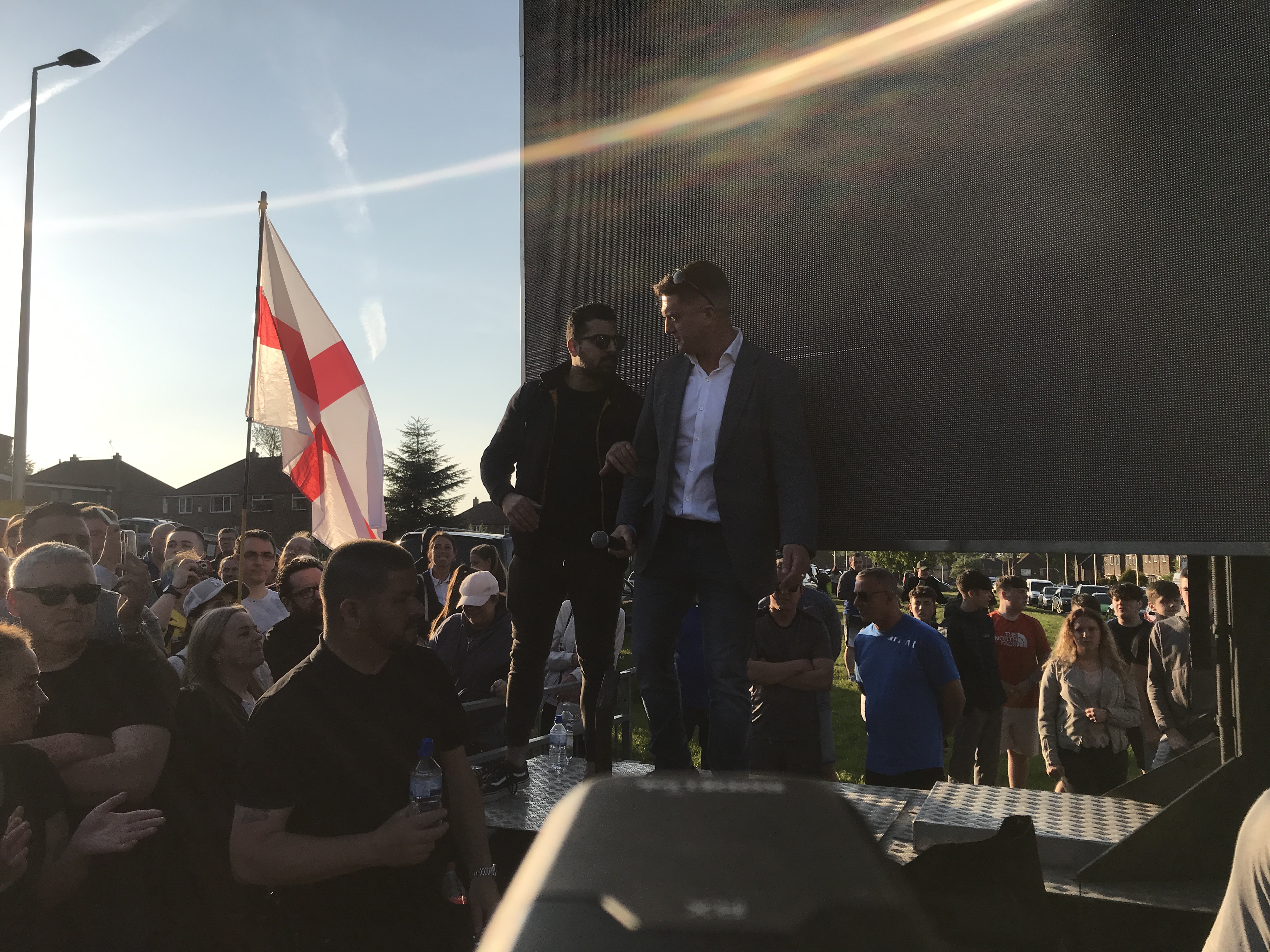 A VIRTUE signalling Wigan MP was left with egg on her face Monday evening as hundreds of working class people turned out on one of the most deprived area’s of the North West to show their support for Tommy Robinson.

Despite the bitter MP showing her true fascist colours and effectively issuing a waring cry against the right, the decent working class folk of Wigan turned out in force to show their support for their working class hero. 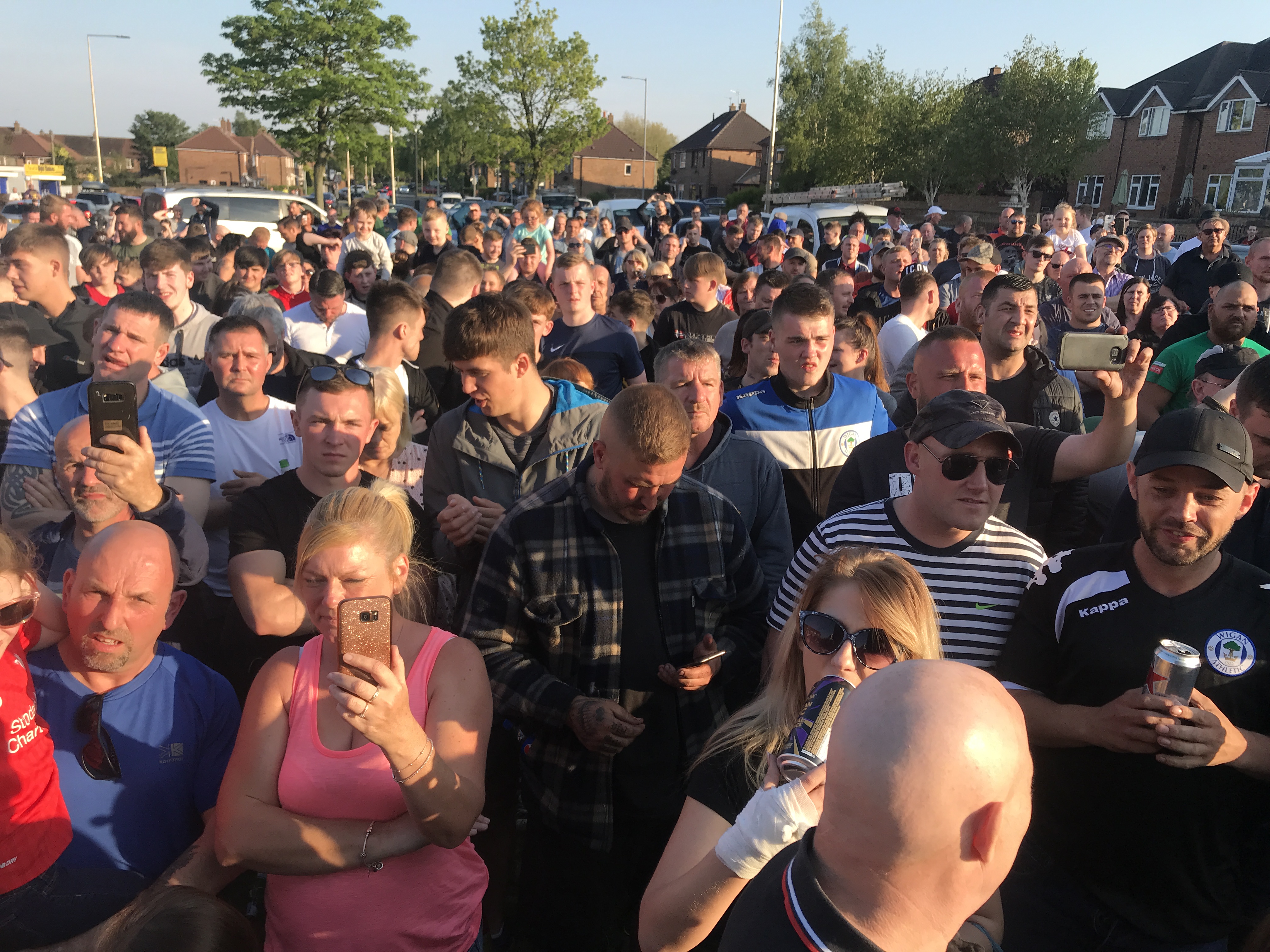 Tommy Robinson visited Norley Hall in Wigan on Monday as part of his European election campaign, a hardened town in the North West that has been under Labour rule and direction for over a hundred years and the tweets of the local Labour MP exemplifies just why that has happened.

Putting out a tweet after the event , Nandy, who has claimed well over a million pound in expenses since she took up office in Wigan over a decade ago has been criticised for the rhetoric embedded in her social media tweets.

Under the ironic misleading heading “Take your hate out of our town” It appeared that Soapbox Nandy was the only hate filled person in Wigan as Tommy’s event attracted hundreds of people and again passed off peacefully without incident.

The champagne socialist MP posted a photo of some text that was filled with hate and anti-Robinson rhetoric in a move that clearly highlights how worried these anti-Brexit phoney MP’s are about losing the power they hold over the working class.

It makes you laugh at times when you see these privileged MP’s virtue signalling to the working class masses that they have controlled and kept dumbed down for too long now.

She is so detached from reality that she can’t possibly speak on behalf of the working class people from Norley Hall and the excellent turnout that greeted Robinson yesterday proved that the working class aren’t listening to virtue signalling MP’s like soapbox Nandy any more.

Tommy and the team were greeted to choruses of “Oh Tommy, Tommy” as we arrived on a large green in-between Norley Hall shops and a large working class council estate.

There was a police drone in the skies above monitoring proceedings which again passed off without incident or arrest.

Robinson spoke to the crowds for around fifty minutes before staying behind for well over an hour to thank everyone for attending by posing for photographs with people, signing books and autographs. It was remarkable to see a true leader staying behind and engaging with the working class people the likes of Nandy has forgotten about.

One local man from the estate told me that he’d never seen any thing like this, he’d never seen a political leader with the stature of Tommy Robinson addressing the working class people of Wigan that the politicians and councillors have forgotten about.

Before being completely outlawed on social media, Tommy Robinson had a following that could engulf most of these politicians and MP’s combined. That alone is a direct threat to the power they hold which is why he is castigated by mainstream media prostitutes and hung out to dry.

Tommy’s event in Wigan has already been touted as his greatest one yet, the turnout reflecting the mood in the town where anti-democratic Labour MP has shunned their votes and ignored their views regarding Brexit.

Over 63% of people in Wigan voted to leave the European Union, so far their voices have been ignored by Nandy who very rarely has a presence in the town other than at election time and yesterday evening was a chance for the locals to have their voices heard again.

Tommy knows that the key to his success lays with the numbers in the working class.

Historically these elections are won on a very poor turnout, sometimes all it takes is a turnout of less than 25% for candidates to be elected and Tommy knows that if he can mobilise the working class people that the establishment elite has forgotten about, he has a very good chance of garnering enough support and votes to WIN the election.

Mainstream media whores continue to brand Tommy a far-right thug, they continue attacking and stereotyping his supporters because they are scared and they want to try and turn people away from engaging with him but it’s too late for that.

We are on their doorstep now and the hate-filled tweets from MP’s and Clowncil leaders that are supposedly tolerant and inclusive only serve to highlight just how concerned they are now about the spread, rise and support of nationalism and populist leaders like Tommy Robinson.

Tommy was given a heroes welcome by hundreds of people in Wigan last night and the words of the local MP simply don’t stack up, Lisa Nandy’s 2+2 always equals 5.

To say he wasn’t welcome in the town was fake news, it simply isn’t true, there were hundreds of men, women, children and families in attendance that just simply wouldn’t agree with soapbox Nandy and it shows again how out of touch she is with her own electorate and constituents.

It shows there is an opportunity to reengage and rejuvenate the electorate and if Tommy can bring them together he stands a very good chance of returning the first independent candidate to be elected to the European Parliament, a move that will send political shockwaves to establishment puppets like Nandy.

Let’s vote Tommy Robinson on May 23rd in the European elections and send them a message that they will never forget.

‘STAB HIM’: Sick Trolls TARGET Tommy After MPs ‘Encourage’ Political Violence
BRICKS, BOTTLES, AND BEATINGS – The TRUTH The Media Doesn’t Want You To See
To Top