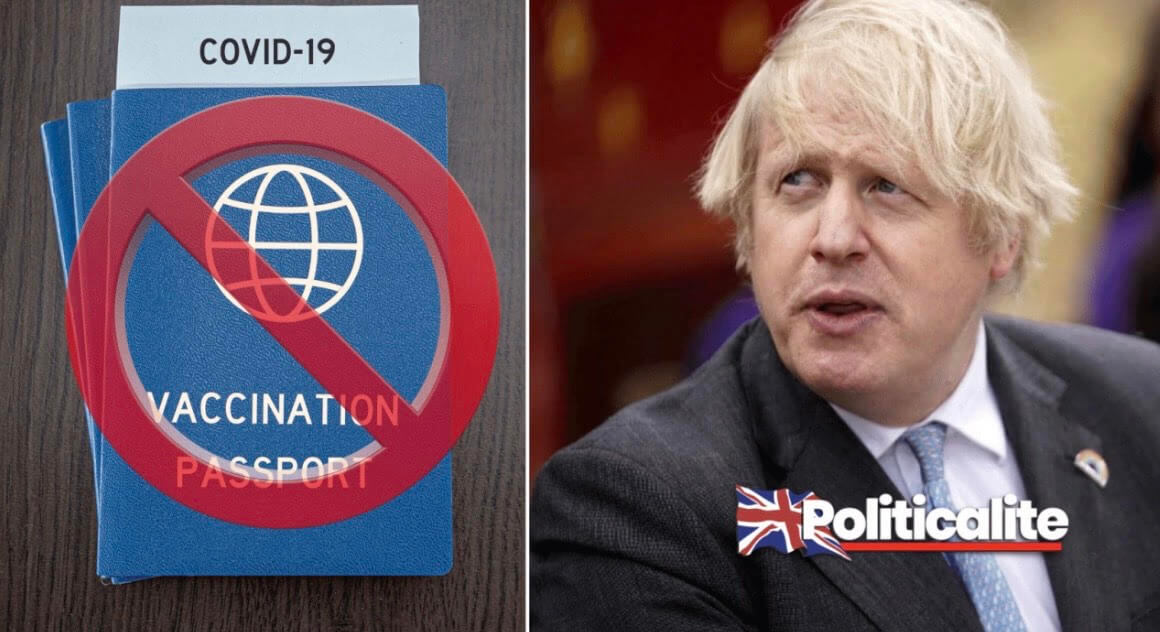 PRIME Minister Boris Johnson is facing a growing battle to introduce vaccine passports as Labour and the SNP joined Tory rebels in ruling out backing the proposals as they stand to protect the British people.

Labour leader Sir Keir Starmer called the current state of play on so-called vaccine passports a “complete mess” on Wednesday, warning that they could be a vast waste of taxpayers’ money when the focus should be on administering jabs.

He joined SNP Westminster leader Ian Blackford in saying their opposition MPs would not back the plans in their current form if the Prime Minister put them to a Commons vote.

Bolton West Tory MP Chris Green also hit back at the plan telling The Bolton News: “Many constituents have been getting in touch with me about their concerns over the Covid status certification.”

“There are big concerns over having a two-tier society, some people having privileges that others are denied, and also questions where this data will end up, your private health data.”

“Or whether there’s a need for it because hospitalisations and deaths have come down so much. I don’t think the UK is the sort of country where we would expect officials or the police to be able to say ‘show me your papers’ so I am against this.”

A Government review into “Covid status certification” said they could “potentially play a role” in settings such as theatres, nightclubs and mass events, and might also be used in pubs and restaurants to reduce social distancing restrictions.

But, during a visit to Plymouth, Sir Keir told broadcasters: “We do not support the Government’s plans in their current form, it’s as simple as that.

“In fact the Government’s plans seem to be changing on an almost-daily basis. Only a few weeks ago the Prime Minister was saying he was thinking of vaccine passports to go to the pub – now he says isn’t. One day he’s talking about tests – then it’s certificates. It’s a complete mess.”

“The UK Government hasn’t published any proposals yet, and the Tory position has been mired in confusion and contradiction. On the basis of the information available, there is not a proposition in front of us that SNP MPs could support,” Mr Blackford said.

Mr Johnson said on Monday that he would “certainly” consult Parliament on certification plans if they go ahead.

Their use is opposed by at least 40 Conservative MPs, which could be enough to defeat the Government with the support of opposition parties.

However, Downing Street sources did not rule out suggestions that the use of domestic certificates could be bundled up with a vote on international vaccine passports.

Prime Minister Johnson, on a visit to Cornwall on Wednesday said it was a responsible approach for any government to “look at the possibility of making sure that we can continue to open up all sectors of the economy in a safe way down the rest of this year and, you know, we will look at all possibilities”.

He again stressed that Covid status certificates would not be introduced for either the April 12 or May 17 steps on the road map, which will see hospitality venues in England open outdoors initially and then indoors.

Such a move could boost the Prime Minister’s chances of winning a vote, because the international passports are far less controversial and would improve the likelihood of overseas holidays.

As they stand, certificates would utilise vaccination status, test results or evidence of someone having contracted and recovered from Covid-19, and could be in paper form or an NHS app.

The Covid Recovery Group (CRG) of Conservative lockdown sceptics has been angered by the possible introduction of vaccine certificates.

CRG deputy chairman Steve Baker, a Tory former minister, has said the requirement to show documents would be “un-British” and warned the country could become a “miserable dystopia of Checkpoint Britain”.

The Liberal Democrats are also opposed to their introduction.

Ministers have ruled out bringing in certification for either the April 12 or May 17 stages of easing lockdown restrictions, but they could be introduced later this year.

The interim findings of the Government’s review said public transport and essential shops or services would not require vaccine passports.

But that left open the prospect of non-essential retail outlets being forced to check on their customers.