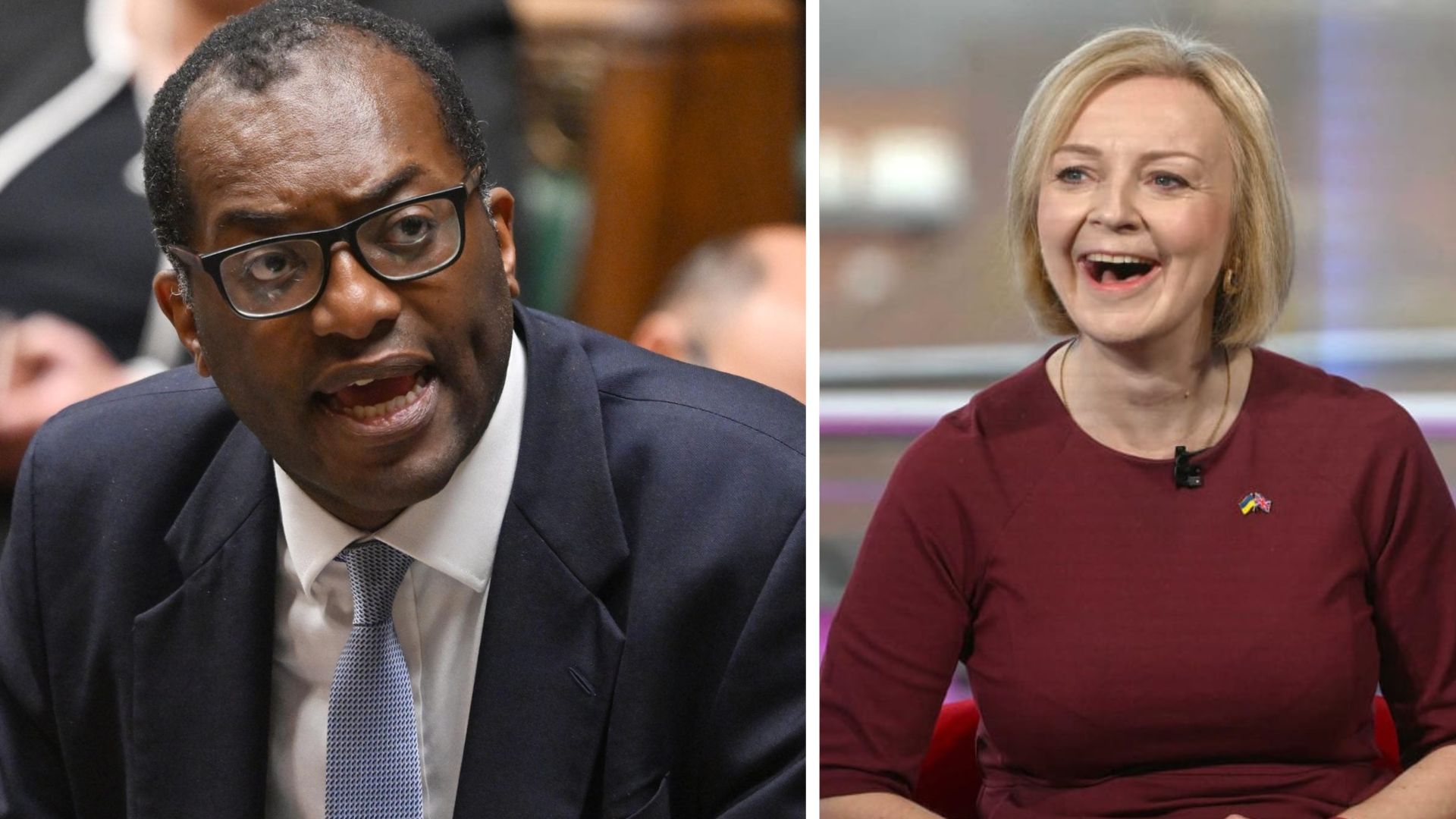 LIZ Truss and Kwasi Kwarteng have abandoned a plan to abolish the top rate of income tax for the highest earners in an astonishing U-turn.

The Chancellor acknowledged that their desire to borrow billions to axe the 45% rate on earnings over £150,000 had become a “terrible distraction” amid widespread criticism and threats of a rebellion.

Hours before he had been due tell the Conservative Party conference they must “stay the course” on the plans, he issued a statement saying: “We are not proceeding with the abolition of the 45p tax rate.”

“We get it, and we have listened,” he added, in language echoed in a tweet from the Prime Minister a day after she said she remained absolutely committed to the cut.

The U-turn will be seen as a massive blow to their authority, coming a little over a week after the tax cut was announced in the mini-budget and just a month into Ms Truss’s premiership.

Mr Kwarteng said he had “not at all” considered resigning despite scrapping a key part of the financial plans he set out on September 23.

He declined to directly apologise to the nation for the financial turmoil and rising mortgage rates and to Tory MPs who had been warned they could be kicked out of the parliamentary party for voting against the tax plans.

Instead he told BBC Radio 4’s Today programme: “There’s humiliation and contrition and I’m happy to own it.”

The Chancellor suggested he had told Ms Truss they needed to back down amid signs of a growing rebellion from Conservative MPs, with senior Tories including Michael Gove publicly attacking their plans.

“The conversation about the 45p rate was this terrible distraction really from what was a very, very strong plan and I’m very pleased that we’ve decided not to proceed with that because it was drowning out the elements of an excellent plan,” he told BBC Breakfast.

Ms Truss and Mr Kwarteng were to make a joint visit linked to the Tory conference on Monday but that was abandoned during the chaos.

Shadow chancellor Rachel Reeves called for them to reverse “their whole economic, discredited trickle-down strategy” as she said the U-turn had come “too late for the families who will pay higher mortgages and higher prices for years to come”.

The pound surged higher in overnight trading on Monday as reports emerged that the Government was preparing to U-turn.

Sterling hit 1.125 US dollars at one stage, recovering to levels seen before the mini-budget, though it pared back some of the gains in early morning trading to stand at 1.119.

Mr Kwarteng did not rule out a new era of austerity to pay for the surviving £43 billion of tax cuts in his mini-budget, nor did he say whether benefits will suffer real-terms cuts as inflation soars.

The Chancellor and Ms Truss had been doubling down on their plans despite the financial turmoil triggered by the package, with the Prime Minister defending the tax cut as recently as Sunday.

They had even resisted backing down in the face of criticism from the International Monetary Fund and a £65 billion emergency intervention by the Bank of England to restore order.

OVERNIGHT, Grant Shapps joined his former Cabinet minister colleague Mr Gove in a growing rebellion to criticise the plans during a cost-of-living crisis.

Mr Kwarteng had been preparing to tell the Conservative Party conference in Birmingham that they must “stay the course” and back their tax plans.

And he had been set to insist in a speech now likely to be overhauled that his measures are vital to boost growth and avoid a “slow, managed decline”.

In a possible hint of what was to come, Ms Truss was criticised for singling Mr Kwarteng out as responsible for the tax cut on Sunday, saying “it was a decision the Chancellor made” rather than one debated by the entire Cabinet.

Spending around £2 billion annually on a tax cut for top earners while scrapping the cap on bankers’ bonuses was seen as politically toxic while millions face the squeeze of the cost-of-living crisis.

Ms Truss has also refused to commit to plans to increase benefits payments in line with inflation, in what would deliver the nation’s poorest a real-terms cuts.

On Sunday, Mr Gove toured fringe events at the conference to give his criticism of the plan, calling it “not Conservative” and hinting he could vote against the measure in the Commons.

Mr Shapps, a former transport secretary, used a Times column to say “this is not the time to be making big giveaways to those who need them least” because “when pain is around, pain must be shared”.

“This bolt-from-the-blue abolition of the higher rate, compounded by the lack in communication that the PM acknowledges, is an unforced error that is harming the Government’s economic credibility,” he said.

Damian Green, a former deputy prime minister, warned that the Tories will lose the next election if “we end up painting ourselves as the party of the rich”.

Tory ex-chancellor George Osborne said it is “touch and go whether the Chancellor can survive” the fallout, telling the Andrew Neil Show it will be “curtains” for Mr Kwarteng if his speech on Monday goes badly.

Andrew Bowie, who was parliamentary private secretary to Theresa May when she was in No 10, agreed with Mr Gove that unfunded tax cuts are not Conservative.

Former minister Maria Caulfield said: “I can’t support the 45p tax removal when nurses are struggling to pay their bills.”

The Telegraph reported that a vote on the 45% measure would not be held until after the November 23 financial statement which will set out how the party aims to bring the public finances under control.