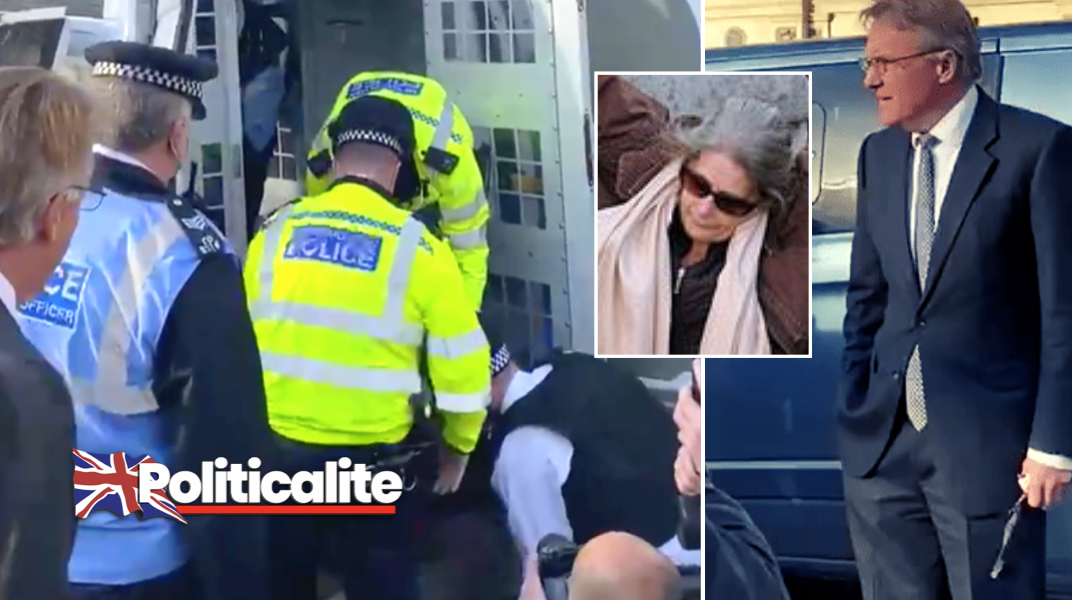 A TORY MP defended a British citizen protesting in College Green outside the Houses of Parliament in Westminster yesterday, winning praise from the public.

The Man of the People Member of Parliament for Broxbourne in Hertfordshire raged at Police as Boris’ Bovver Boys bundles an elderly protester into the back of a van outside Parliament. He said: “You must have mothers!” and branded the arrest as an “outrage” and a “disgrace” echoing the views of millions of Brits who have been practically banned from protesting like something out of East Berlin.

He also added that it was “un-British” of the Old Bill to bundle the elderly woman into a Police van for protesting.

Walker, a former chair of the 1922 Committee told the officers that their actions were ‘an outrage’ as he walked across towards Portcullis House on Tuesday afternoon.

He later exposed the scandal in the House of Commons.

He said: “Madam Deputy Speaker, will you bring the Prime Minister and/or the Home Secretary here today to sort this out?”

“She was an old lady robbed of her dignity for having the courage to protest about having her fundamental rights and those of my constituents and others removed.”

Responding to the point of order, deputy Commons speaker Dame Rosie Winterton said: ‘I thank the honourable gentleman for his point of order. I can see that this is obviously an extremely distressing situation.”

“I shall of course ensure that the Speaker (Sir Lindsay Hoyle) is aware of the honourable gentleman’s comments.”

‘But I also know that we have ministers here who I’m sure will ensure that his comments are fed back and his very strong views on the incident that happened.’

Tom Ridgway, who witnessed the incident, said: ‘I saw an elderly woman, apparently an anti-lockdown protester, being bundled into the back of a police van at 2pm outside the entrance to Parliament.

‘I only saw one other protester who was shouting, it didn’t seem to be an organised protest.’

As Sir Charles walked across he said tot he officers: ‘You must have mothers? What an outrage! What a disgrace! This is an absolute disgrace.’

The Conservative has been a staunch critic of Boris Johnson’s coronavirus policy and voted against the most recent national lockdown.

Sir Charles, the member for Broxbourne, Hertfordshire, described the legislation as a ‘drift further into an authoritarian, coercive state.’