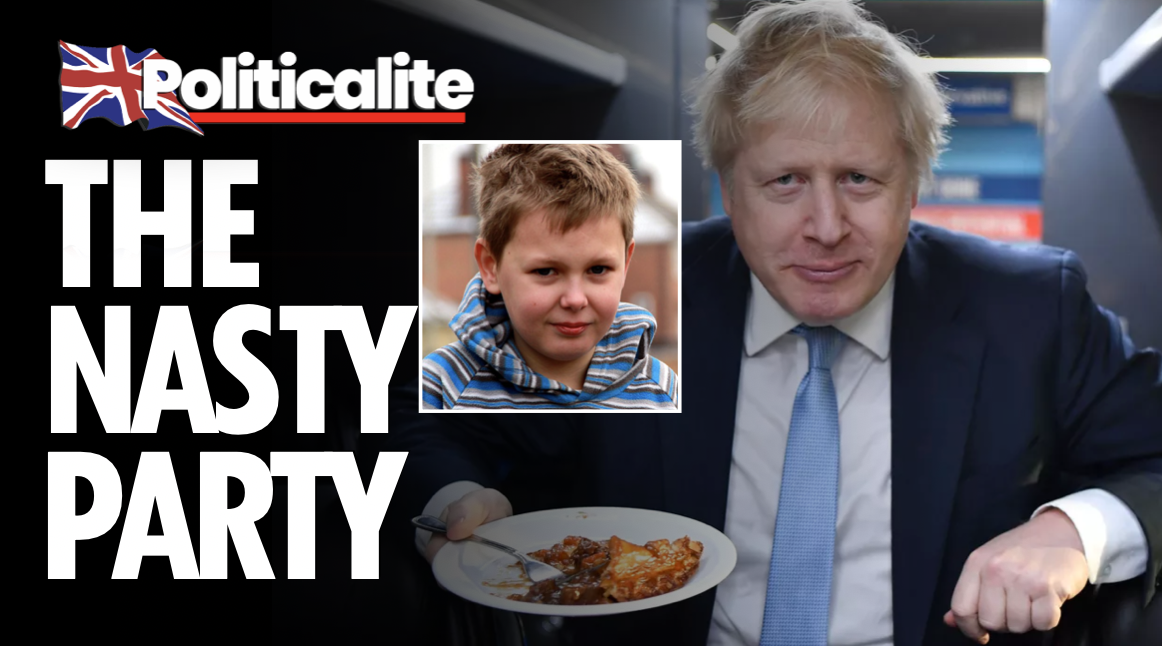 THE TORIES regained their crown of the Nasty Party yesterday after refusing a Labour motion to extend support for free school meals over the winter holidays amid the Corona crisis, in a campaign that was backed by Man United footballer Marcus Rashford.

The extra support amid the pandemic would have helped to feed some of the UK’s most left-behind kids whilst our over-fed MP’s in the House of Commons eat in some of their more than 30 ‘canteens’ at a cost of £6m-per-year to the taxpayer. Now, some of the poorest kids in our society might go hungry.

The decision by Tory MPs came just days after Boris Johnson made millions poorer in the North by imposing a tough Tier 3 lockdown on Greater Manchester, despite having no support from local leaders, including some Conservative and Labour MPs.

Labour’s Shadow Education secretary Kate Green said: “Boris Johnson and the Conservatives have badly let down more than one million children and their families. “No child should go hungry over the holidays, but the Government is blocking the action needed to prevent this.”

“We pay tribute to Marcus Rashford and others for shining a spotlight on this incredibly important issue.
“This campaign is not over and the Government must reconsider.”

RASHFORD KEEPS UP THE FIGHT

England footballer Marcus Rashford vowed to keep campaigning to extend free school meals over the holidays after MPs voted against the measure.

The Man United player told politicians to “stop stigmatising, judging and pointing fingers” as he warned a “significant number” of children will go to bed hungry and “feeling like they do not matter” because of the Tory MPs comments on Wednesday. He called on people to “unite” to protect the most vulnerable children, adding: “For as long as they don’t have a voice, they will have mine.”

Rashford released a statement after the Labour motion, which called for the scheme to be extended over school holidays until Easter 2021, was defeated by 261 votes to 322 – majority 61.

Five Conservative MPs rebelled to support the motion, including Education Select Committee chairman Robert Halfon, but it was not enough.

Downing Street ruled out performing a late U-turn ahead of the vote, with Prime Minister Boris Johnson telling MPs that support will continue for children on low incomes.

“We will continue to use the benefits system and all the systems of income to support children throughout the holidays as well,” he added.

In the Commons, several Conservative MPs argued against Labour’s proposal, with Brendan Clarke-Smith (Bassetlaw) saying he did not believe in “nationalising children”.

He told the Commons: “Where is the slick PR campaign encouraging absent parents to take some responsibility for their children?

“I do not believe in nationalising children.” said one Tory MP. “Instead, we need to get back to the idea of taking responsibility, and this means less celebrity virtue-signalling on Twitter by proxy and more action to tackle the real causes of child poverty.”

“Now I have no doubt that Mr Rashford is an expert in his own experience, but we should not forget that the experiences he so movingly described took place under a Labour government then supposedly at the peak of its powers in tackling child poverty in this country.”

Kevin Courtney, joint general secretary of the National Education Union, branded the result of the vote as “callous”, adding: “No MP who voted against this will be going hungry tonight, not one of them will be wondering where their next meal is coming from and not one of them will struggle through every single day with insufficient food.

“This isn’t right. No child should return to school after the half-term break too hungry to learn.”