THANK U, NEXT: Theresa May 'TO QUIT' This Summer - Sources
Advertisement 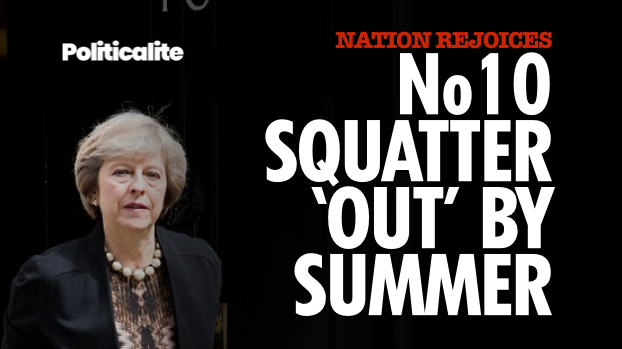 UNPOPULAR Tory Dictator, sorry, ‘Prime Minister’, Theresa May is set to QUIT in just MONTHS according to sources.

Widely unpopular May will exit Number 10 for the last time sometime in the summer, after ‘delivering’ Brexit, a top Tory source told this website.

The early exit is reportedly so she can ‘have influence’ over who replaces her, and one source told Politicalite that ‘she wants to stop Boris from succeeding her’ and ‘will use her influence’ to block his Number 10 ambitions’.

Boris is still a popular MP, and is not tarred with the same ‘out of touch’ brush that the majority of parliamentarians receive.

His ‘Burqa-Row’ last year was a great advantage to potential voters sick and tired of PC madness.

One Tory MP told The Sun last night: “There’s a big feeling now that she has run out of road.”

“All her capital is burnt, both here and in Brussels, and someone else needs to pick up the reins from there with a new mandate.”

In this article:boris johnson, featured, Number 10, theresa may, Tories