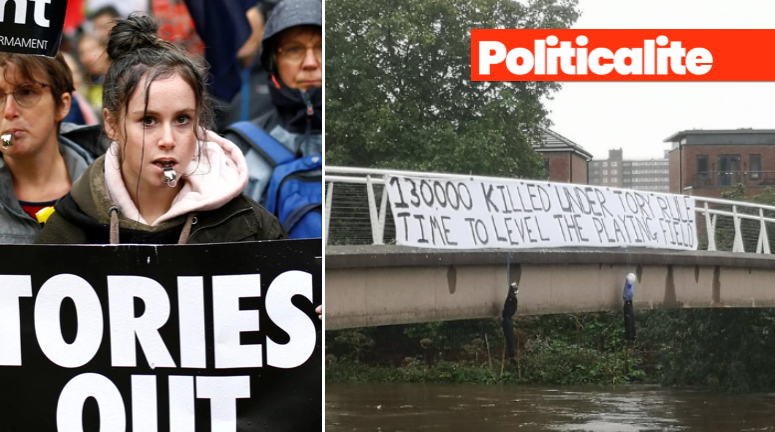 One banner read “130,000 killed under Tory rule. Time to level the playing field.” along with effigies on the River Irwell. 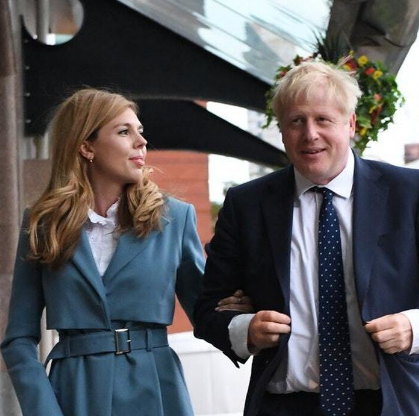 CARRIE ON: Bonking Brexiteer Boris Arrived In Manchester For The Conference

Manchester City Centre, a Labour and Remain stronghold was hit with ‘paid for’ protesters who brought along a Trump blimp.

One Tory Councillor visiting the conference wrote on Twitter: “Neve[r] have I felt more apprehensive than seeing this in my morning run pre #CPC19.

“Does this classify as death/terrorist threat? Utterly vile.”

Neve have I felt more apprehensive than seeing this in my morning run pre #CPC19. Does this classify as death/terrorist threat? Utterly vile. pic.twitter.com/3beha85IaW

Manchester Metro Mayor Andy Burnham said that the banner, that had fake bodies ‘hanging’ would be taken down by Police.

The poster could have been hung by Labour activists with a Momentum Twitter account posting a picture of the effigies and banner with the Tweet: “Good morning @Conservatives. Welcome to Manchester.”

Hundreds of protesters also took to the streets of Manchester City Centre. 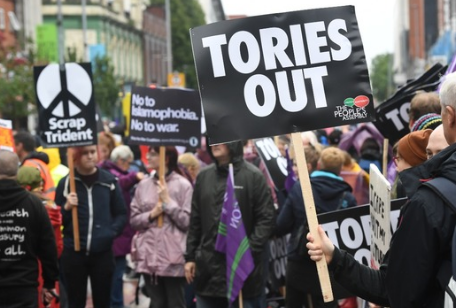 A giant Boris Johnson blimp was inflated at Castlefield Bowl ahead of a Reject Brexit – Defend Our Democracy event on Sunday afternoon.

The six-metre tall inflatable depicted the Prime Minister dressed in blue shorts with red hearts and the word “Nigel” on, and a T-shirt showing a £350 million bus. 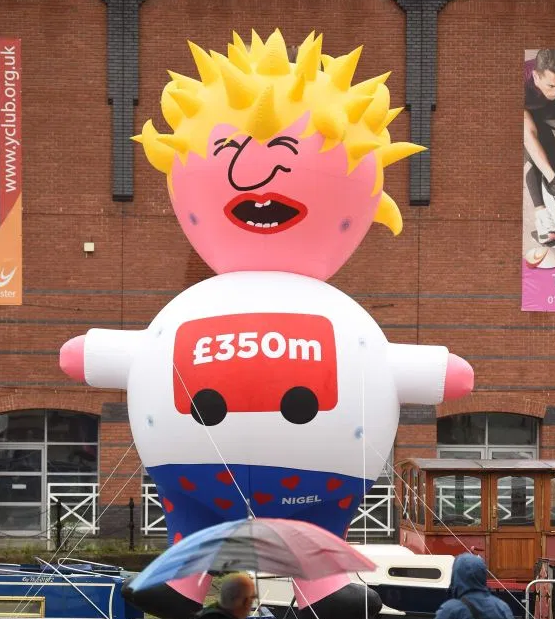 Demonstrators gathered on Oxford Road at about midday for a Shut Down the Tories event before marching through heavy downpours to Deansgate, where a rally was due to be held.

Shadow education secretary Angela Rayner was among those heading the march, holding a banner saying “No More Austerity”.

Others held placards saying “Tories Out” and “Defy Tory Rule”. 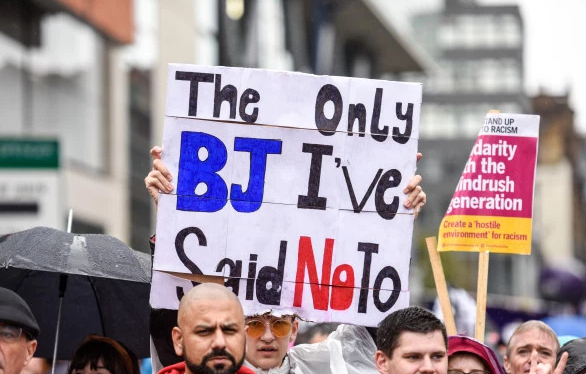 CHEEKY: One Protester Said He Would Rather Not Have A ‘BJ’

Marchers banged drums, blew whistles and chanted “Tories out” and “Boris Johnson, shame on you” as they made their way through the city, pausing as they passed near Manchester Central, where the conference is being held.

Roads through the city were closed by police as the march took place and mounted officers led the demonstrators.

Demonstrators were greeted by the blimp when they arrived for the rally after marching from Whitworth Park.

Many waved European flags or wore blue berets with yellow stars on.

Speakers included human rights campaigner Peter Tatchell, who told the crowd: “The time for party self-interest is over. Everybody from every party must unite to stop a no-deal Brexit.”

Sir Richard Leese, leader of Manchester City Council, said: “The right to peaceful protest is a fundamental part of our democracy and we have seen that exercised on the streets of our city today.

“It’s a testament to the work of Greater Manchester Police, council staff and others involved in ensuring today went as smoothly as possible, as well as campaign groups who engaged with us and those taking part, that these large-scale protests have passed off without incident.”

THIS IS HOW TORIES DO IT! Saj Announces Plans For WHOPPING National Living Wage Rise