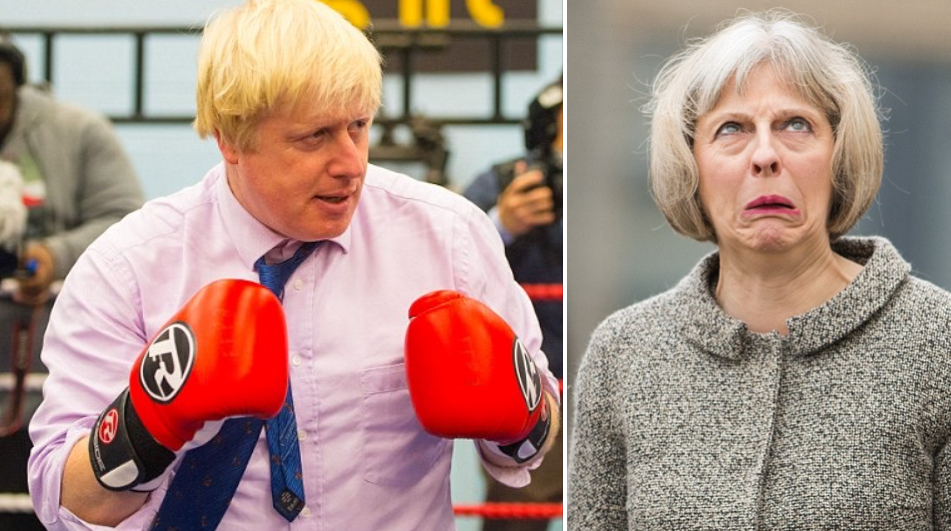 BORIS Johnson has thrown a political grenade at Appeaser Theresa as the Conservative Party conference starts by branding her Brexit plan “deranged” and “preposterous”.

The ex-Foreign secretary’s provocative comments came as Mrs Dis-May sets out plans aimed at propping-up her weak Brexit position, announcing measures to crack down on foreigners buying homes and proposals for a ‘nationwide festival’ in 2022 – the year of the next scheduled general election.

In an interview with the Sunday Times, Boris said the UK should build a bridge to Ireland and put the HS2 rail line on hold to focus on a high-speed link in the north of England.

He branded Mrs May’s call for a facilitated customs arrangement – part of the Chequers plan to break the impasse in Brexit talks – “entirely preposterous”.

He even said he could strike a better deal than Mrs May,“Unlike the Prime Minister, I fought for this, I believe in it, I think it’s the right thing for our country and I think that what is happening now is, alas, not what people were promised in 2016.”

Setting out an alternative policy platform as the Conservative Party conference began in Birmingham, the former cabinet minister said: “I think we need to make the case for markets.

“I don’t think we should caper insincerely on socialist territory. You can’t beat Corbyn by becoming Corbyn.”

May hit back and signalled that she intended to remain in Number 10 for years to come by saying: “There’s a long-term job to do.”

She added: “It’s not just about Brexit, it’s about the domestic agenda as well.

“I think we’re at a very important and historic moment for the UK. There are real opportunities for the UK outside the European Union.”

Setting out her plans for a festival in post-Brexit Britain, (yes, really – a festival) she said: “We want to showcase what makes our country great today.

“We want to capture that spirit for a new generation, celebrate our nation’s diversity and talent, and mark this moment of national renewal with a once-in-a-generation celebration.”

The Tory gathering in Birmingham has been marked by a deepening rift over Brexit policy.

The party was also hit by an embarrassing security gaffe as a flaw in the official conference app allowed access to the contact details of Cabinet ministers and senior MPs.