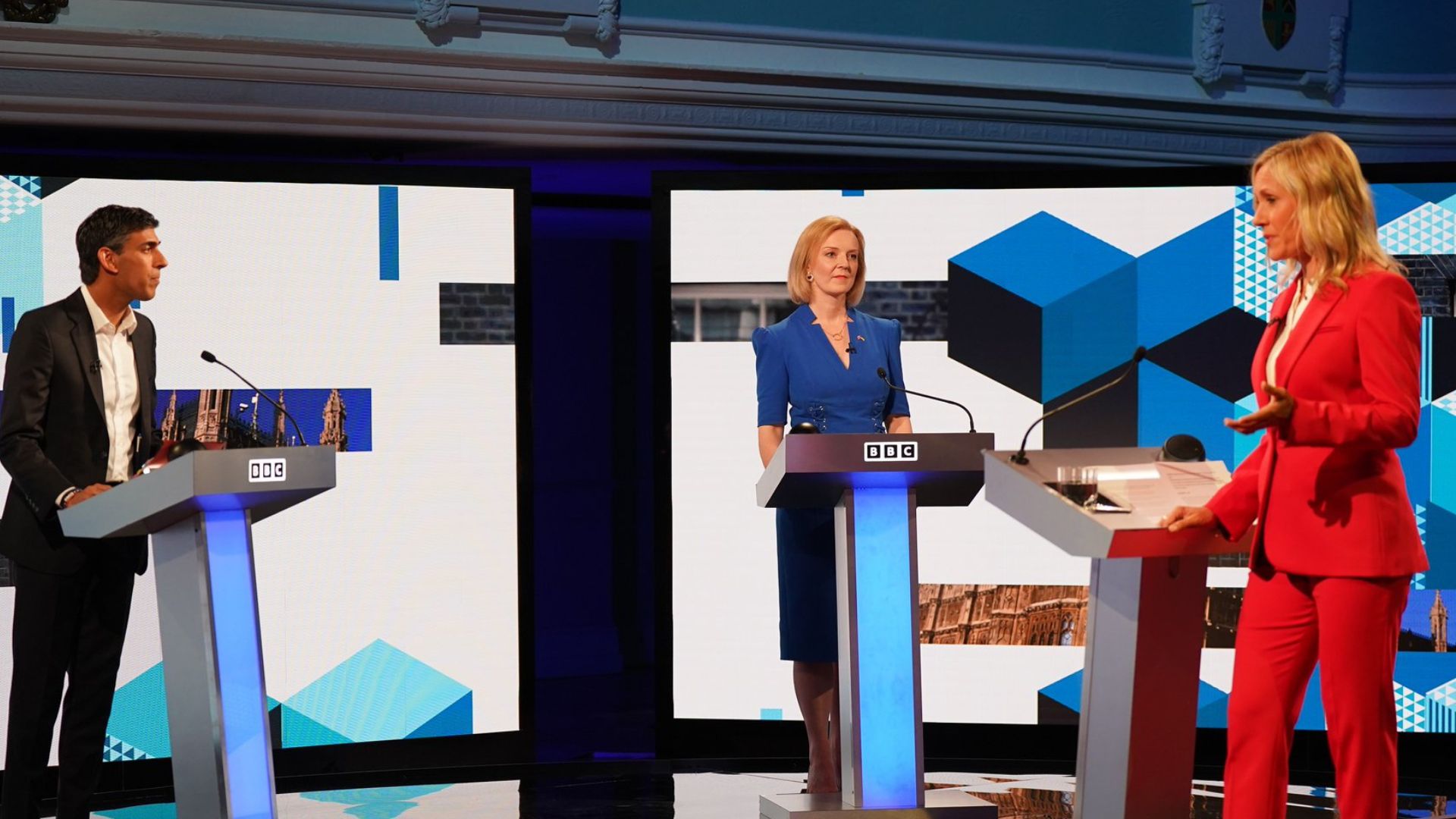 Former chancellor Mr Sunak claimed there is “nothing Conservative” about Ms Truss’s approach and it would give the party “absolutely no chance” of winning the next election.

Foreign Secretary Ms Truss in turn suggested her rival would lead the country into a recession.

Ms Truss said she would put an economic growth plan in place “immediately” if she becomes prime minister, along with imposing a temporary moratorium on the green energy levy.

The increase in national insurance would also be reversed, Ms Truss said.

Mr Sunak said he would like to make sure that his government “always” has policies in place to support through the cost-of-living crisis.

The pair clashed on the BBC after a weekend that saw allies of the two Tory leadership hopefuls trade increasingly personal attacks.

“That is the country’s credit card and it’s our children and grandchildren, everyone here’s kids will pick up the tab for that.

“There’s nothing Conservative about it.”

Ms Truss later said: “No other country is putting up taxes at this moment, the OECD has described Rishi’s policies as contractionary.

“What does contractionary mean?

“It means it will lead to a recession.

“We know what happens when there’s a recession.

“I know what it’s like when people have to struggle when you have high unemployment and people don’t have work to go to.

“We cannot allow that to happen.”

Mr Sunak spoke over Ms Truss and warned inflation was a problem in the 1980s and it is a “problem we have now”, adding: “We need to get a grip on inflation.

“If we don’t do that now, it’s going to cost all of you and everybody watching at home far more in the long run.

“Liz, your plans, your own economic adviser has said that will lead to mortgage interest rates going up to 7%, can you imagine what that’s going to do for everyone here and everyone watching, that’s thousands of pounds on their mortgage bill?

“It’s going to tip millions of people into misery and it’s going to mean we have absolutely no chance of winning the next election either.”

Ms Truss highlighted Mr Sunak wants to raise corporation tax this autumn at a time of a “global economic crisis”.

She later said: “This Chancellor has raised taxes to the highest rate in 70 years and we’re now predicted a recession.

“The truth is in the figures.”

The studio audience was made up entirely of people who voted Conservative at the last general election.

With postal ballots set to arrive on Tory members’ doorsteps by August 5, Mr Sunak was under pressure to use the BBC debate and another hosted by TalkTV and the Sun on Tuesday to make an early breakthrough.

The debate in Stoke came just hours after a Conservative peer claimed Boris Johnson “does not want to resign” and “wished that he could carry on” as Prime Minister.

Lord Cruddas of Shoreditch, a former Conservative Party treasurer, said the comments were made to him by Mr Johnson over lunch at Chequers on Friday.

The peer is running a campaign to give Conservative Party members a vote on whether to accept Mr Johnson’s resignation as Tory leader.

Downing Street responded by insisting Mr Johnson will leave the post when a new Tory leader is chosen in September.

A Number 10 spokeswoman said: “The Prime Minister has resigned as party leader and set out his intention to stand down as PM when the new leader is in place.”