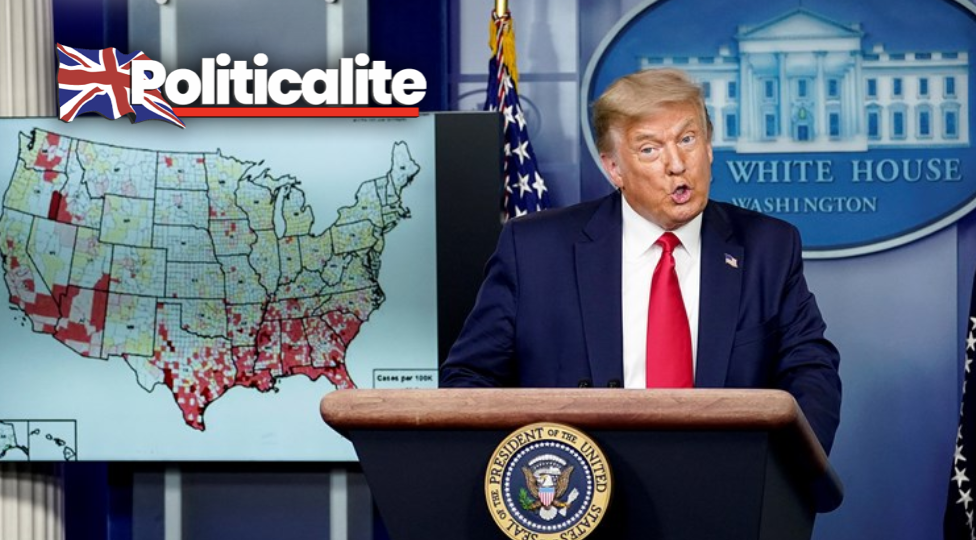 PRESIDENT Trump announced to the press on July 23rd that the move of the Republican National Convention from Charlotte, North Carolina to Jacksonville, Florida, scheduled for August 24-27, is cancelled, due to a COVID-19 outbreak.

He said, “I’ll still do a convention speech in a different form, but we won’t do a big crowded convention per se. It’s just not the right time for that.” He still plans on some form of nominating public event in Charlotte, NC.

Even though statistics aren’t always reliable on the virus, it was a good decision for Trump to follow his medical advisors to not gather large numbers of people together indoors. Some medical professionals also question gatherings of large numbers of people outdoors due to dangers of the virus, but the public doesn’t always seem to understand the risk. One health professional in Wellington, Florida,, Judith Streisand, MD, uses caution when venturing out, “We are isolating at home. I am still riding my horse, without a mask, as it is outdoors. I go shopping with gloves and mask when I have to.”

As to large gatherings, a New York City osteopath reflects, “The Mount Rushmore gatherings and social protest gatherings are likely to end up being COVID parties. By supporting rights to free speech and social gatherings, it may well end up being COVID parties that people are doing. Voluntarily, more people will die from COVID, not to mention the adverse health effects of putting off regular health care, and stress as side effects.”

There are additional health related issues to be considered. The ongoing violent protests in Chicago, Illinois, Portland, Oregon, Seattle, Washington and elsewhere come at a personal cost. Alex Nicolson, RN, Jersey City, New Jersey, says, “All the social protests will result in a wild fire of more COVID cases. Besides the numbers of people who will get sick, those involved in violent protests present a medical problem. Anger kills, not just who they attack, but themselves. I know a case where I saw a woman in our church lost her temper, yelling and screaming at another woman. She was out of control. Two weeks later I heard she died from a stroke. Constant anger can mean high blood pressure and stroke.”

As to out of control demonstrations, politicians such as Mayor Ted Wheeler in Portland have not been sufficiently challenged by the press as to why they show up to support their city’s own destructive protestors. Wheeler himself is generally surrounded by five security guards, but otherwise he is against a police presence. He cut the police budget but refused to abolish them for which he was heavily criticized by a leftist mob on Wednesday.

Do liberal mayors truly believe tearing apart the city with looting and violence can lead to social change? At any rate, permissive mayors are encouraging masses of people to congregate, which may turn out to spread COVID-19.

There’s also the issue of masks, which many don’t always wear in public protests. The medical community is divided on this issue and Federal directives have flip flopped on masks. One knowledgable source, Dr Huang Shao Xun, NYC acupuncturist and Chinese herbal medicine specialist, is leary of social protests. He says, “The virus is extremely dangerous. Stay away from crowds. Wear a mask outside and keep your windows open indoors, even with air conditioning.”

The math for prevention of the spread of COVID-19 is provided by Nassim Nicholas Taleb, Professor of Risk Engineering, NYU. He writes, in The Masks Masquerade, “The benefits of masks compound, simply because two people are wearing them and you have to look at the interaction … a reduction of viral load by 75% for a short exposure could reduce the probability of infection by 95% or more … it’s a multiplicative process: every person you infect will infect others … In fact, masks (and faceshields) supplemented with constraints of superspreader events can save us trillions of dollars in future lockdowns (and lawsuits) and be potentially sufficient (under adequate compliance) to stem the pandemic. Bureaucrats do not like simple solutions.”

Many around the US, where there are fresh outbreaks of the virus such as in Texas, seem to have given up on lockdown and refuse to wear masks. Their frustration would seem to indicate a reaction to a failed policy in general on how COVID-19 was handled, resulting in a broken economy. It’s good to remember that one country deserves high praise for its handling of the virus – Taiwan.

Taiwan sent its own delegation of CDC scientists to Wuhan to investigate what was called China’s “pneumonia” outbreak in January.

They discovered a corona virus that is highly contagious. Their solution was to keep the economy going with everyone wearing masks. The Taiwan CDC controlled their borders. Taiwan tried to warn the WHO and the world about the virus in December but was largely ignored. Their model worked. As of June 29, in a population of 23.8 million, they had only 7 deaths. The US ignored Tawain’s solution.

Some protestors in the US look to Sweden as a champion of rights for not demanding a lockdown or masks. In the end it proved a disaster. Seniors have been dying off in great numbers according to Dr Jon Tallinger.

As to US cities, protests are continuing with Federal forces coming in to some cities such as Chicago and Portland to quell the violence. Elsewhere, libertarians persist to flaunt mask-wearing directives. With the downtowns in tatters, it’s not known exactly how voters will react this early on.