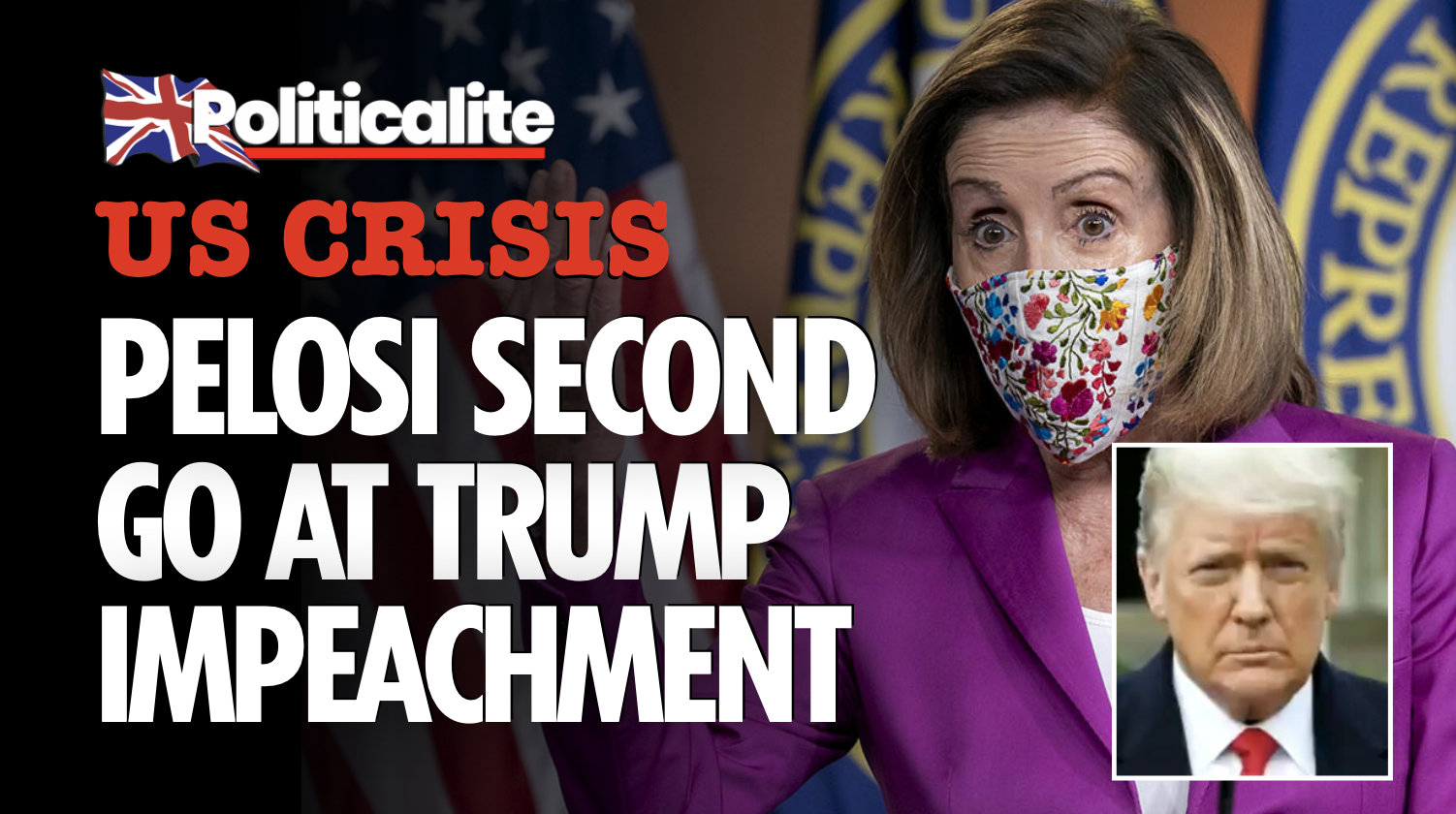 PRESIDENT Trump is set to be impeached so that he cannot run in 2024, in a shocking attack on some of the seventy million voters who backed Mr Trump in the US Election.

Ms Pelosi made the announcement in a letter to colleagues on Sunday. She said the House will act with solemnity but also urgency with just days remaining before Mr Trump is due to leave office on January 20.

“In protecting our Constitution and our Democracy, we will act with urgency, because this President represents an imminent threat to both,” she said.

“The horror of the ongoing assault on our democracy perpetrated by this President is intensified and so is the immediate need for action.”

Ms Pelosi said that first the House will try to force vice president Mike Pence and the Cabinet to oust Mr Trump by invoking the 25th Amendment.

On Monday, House leaders will work to swiftly pass legislation to do that. If it is blocked by Republicans, which is almost certain, the House will convene for a full House vote on Tuesday.

Ms Pelosi explained that the resolution calls on Mr Pence “to convene and mobilise the Cabinet to activate the 25th Amendment to declare the President incapable of executing the duties of his office”.

Under the procedure, the vice president “would immediately exercise powers as acting President”, she wrote.

Next, the House would move to consider the articles of impeachment, Ms Pelosi said. The day for an impeachment vote was not set.

With impeachment planning intensifying, two Republican senators said they want Mr Trump to resign immediately as efforts mount to prevent him from ever again holding elective office in the wake of deadly riots at the Capitol.

A violent and mob of Mr Trump’s supporters overpowered police, broke through security lines and windows and rampaged through the Capitol on Wednesday, forcing lawmakers to scatter as they were finalising President-elect Joe Biden’s victory in the Electoral College.

House Democrats were expected to introduce articles of impeachment on Monday. The strategy would be to condemn the president’s actions swiftly but delay an impeachment trial in the Senate for 100 days.

That would allow Mr Biden to focus on other priorities as soon as he is inaugurated on January 20.

Pressure was mounting for Mr Trump to leave office even before his term ended amid alarming concerns of more unrest ahead of the inauguration.

The president whipped up the mob that stormed the Capitol, sent lawmakers into hiding and left five dead.

House leaders, furious after the insurrection, appear determined to act against Mr Trump despite the short timeline.

Late on Saturday, Ms Pelosi convened a conference call with her leadership team and sent a letter to her colleagues reiterating that the president must be held accountable.

She told her caucus, now scattered across the country on a two-week recess, to “be prepared to return to Washington this week” but did not say outright that there would be a vote on impeachment.

“It is absolutely essential that those who perpetrated the assault on our democracy be held accountable,” Ms Pelosi wrote. “There must be a recognition that this desecration was instigated by the President.”

Senate majority leader Mitch McConnell has said an impeachment trial could not begin under the current calendar before Inauguration Day.

Another idea being considered was to have a separate vote that would prevent Mr Trump from ever holding office again.

That could potentially only need a simple majority vote of 51 senators, unlike impeachment, in which two-thirds of the 100-member Senate must support a conviction.

The Senate was set to be split evenly at 50-50, but under Democratic control once vice president-elect Kamala Harris and the two Democrats who won Georgia’s Senate runoff elections last week are sworn in. Ms Harris would be the Senate’s tie-breaking vote.

While many have criticised Mr Trump, Republicans have said that impeachment would be divisive in a time of unity.

Senator Marco Rubio said that instead of coming together, Democrats want to “talk about ridiculous things like ‘Let’s impeach a president’” with just days left in office.

Still, some Republicans might be supportive.
Senator Ben Sasse said he would take a look at any articles that the House sent over. Senator Adam Kinzinger, a frequent critic of the president, said he would “vote the right way” if the matter were put in front of him.

The Democratic effort to stamp Mr Trump’s presidential record — for the second time — with the indelible mark of impeachment had advanced rapidly since the riot.

David Cicilline, a leader of the House effort to draft impeachment articles accusing Mr Trump of inciting insurrection, said on Sunday that his group had 200-plus co-sponsors.

The articles, if passed by the House, could then be transmitted to the Senate for a trial, with senators acting as jurors to acquit or convict Mr Trump. If convicted, he would be removed from office and succeeded by the vice president.

It would be the first time a US president had been impeached twice.

221
SHARES
Share Tweet
In this article:donald trump, Nancy Pelosi, United States, US, US Capitol Riots
Up Next: