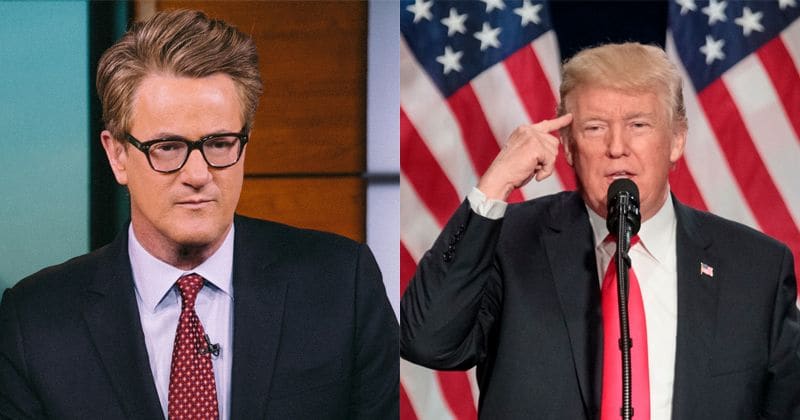 A LOONY MSNBC Host sparked fury after saying that Trump hurt the ‘dream of America’ more than the 9/11 terrorists.

Joe Scarborough, the host of MSNBC’s left-wing loony liberal “Morning Joe” programme tweeted that “Trump is damaging the dream of America more than any terrorist attack ever could” promoting a column he wrote one day before the 17th anniversary of the September 11th attacks that rocked not just America, but the world.

My Latest—> Trump is damaging the dream of America more than any terrorist attack ever could. https://t.co/DEnYurEFmW

The atrocity carried out by Al-Qaeda killed almost 3,000 people.

Scarborough who was once one of Trump’s strongest supporters in the runup to the Election, before changing his mind and turning on him – wrote a column in the Washington Post.

It said: “Trump is harming the dream of America more than any foreign adversary ever could.”

He said: “Sixteen years of strategic missteps have been followed by the maniacal moves of a man who has savaged America’s vital alliances, provided comfort to hostile foreign powers, attacked our intelligence and military communities, and lent a sympathetic ear to neo-Nazis and white supremacists across the globe,” Scarborough wrote.

“For those of us still believing that Islamic extremists hate America because of the freedoms we guarantee to all people, the gravest threat Trump poses to our national security is the damage done daily to America’s image.”

Scarborough then cited a column by The New York Times’ Roger Cohen, who wrote “America is an idea. Strip freedom, human rights, democracy and the rule of law from what the United States represents to the world and America itself is gutted.”

Scarborough allowed Trump to call into “Morning joe” on a regular basis, hung around Mar-a-Lago and was even accused of conducting a softball town hall event with Trump in 2016 before the MSNBC anchor ditched the GOP and decided to back away from supporting his old friend. A Rolling Stone magazine article in February 2016 even referred to Scarborough and Mika Brzezinski as “Trump’s Lapdogs.”

Conservative strategist Chris Barron told Fox News that “shamelessly exploiting the death of 3,000 Americans in an attempt to do political damage to President Trump is a new low, even for Joe Scarborough.”