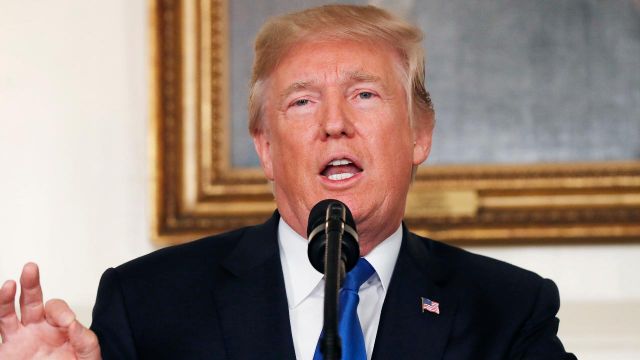 PRESIDENT Donald Trump has pulled the United States out of the Iran Nuclear deal sparking fears of more conflict in the Middle East.

Despite appeals by European countries, Mr Trump said in a televised address from the White House that he would reimpose U.S. economic sanctions on Iran to undermine

The 2015 agreement, worked out by the United States, five other world powers and Iran, lifted sanctions on Iran in exchange for Tehran limiting its nuclear programme. The pact was designed to prevent Iran from obtaining a nuclear bomb.

Trump thinks that the deal does not address Iran’s ballistic missile programme, its nuclear activities beyond 2025 or its role in conflicts in Yemen and Syria.

The Israeli military went on high alert on Tuesday for a possible flare-up with neighbouring Syria, which is allied to Iran.

Iranian President Hassan Rouhani said on Tuesday that Iran would remain in the deal without Washington.

THOSE DAYS ARE OVER: Trump blasts EU and says ‘we’re NOT doing business with these guys’