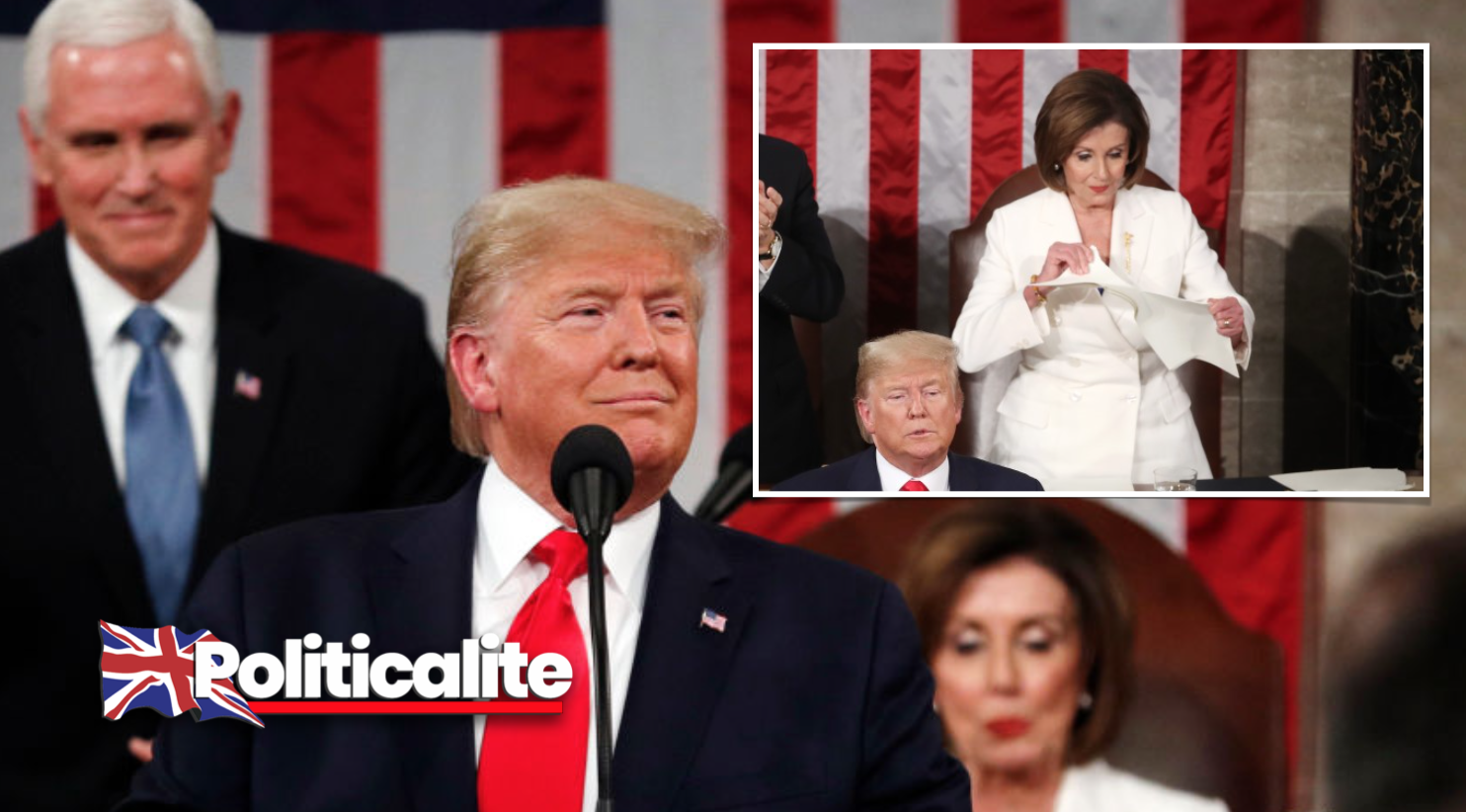 NASTY Nancy Pelosi stunned viewers in America after she tore up a copy of President Donald J. Trump’s State of the Union address after he had addressed the nauton.

Butthurt Liberal Pelosi, still in a state of shock after her plan to Impeach the President was highly expected to be thrown out. She found it tough to sit through the annual address by the President to the U.S. congress. 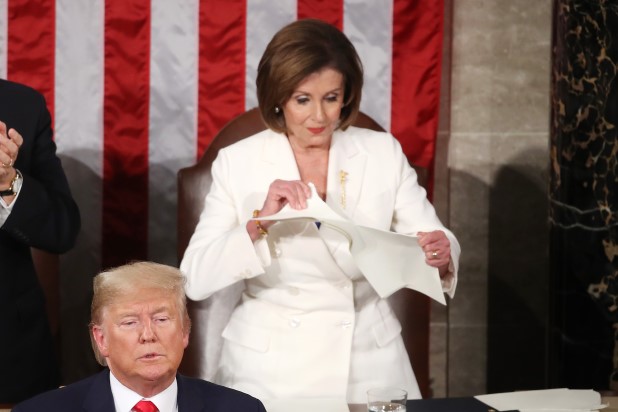 House Speaker Nancy Pelosi ripped up her copy of the speech after Mr Trump finished.

Mr Trump, the first president to run for re-election after being impeached, received a huge welcome to the House of Representatives, with some Republicans chanting “Four more years” while Democrats stood silently.

“In just three short years, we have shattered the mentality of American decline and we have rejected the downsizing of America’s destiny.”

“We are moving forward at a pace that was unimaginable just a short time ago, and we are never going back.”

Setting a measure for success and then contending he had surpassed it, Mr Trump has gone from an inaugural address that decried “American carnage” to extolling the “Great American comeback”, claiming credit for the nation’s economic success as a chief rationale for a second term.

Republican members of Congress applauded nearly every sentence of Mr Trump’s speech, often leaping to their feet to cheer him.

In the nationally televised speech, Mr Trump was speaking from the House of Representatives, on the opposite side of the Capitol from where the Senate is expected to acquit him on Wednesday, largely along party lines.

Mr Trump aimed to spend the first part of his speech highlighting the economy’s strength, including low unemployment, stressing how it has helped blue-collar workers and the middle class, though the period of growth began under his predecessor, Barack Obama.

And what Mr Trump calls an unprecedented boom is, by many measures, not all that different from the solid economy he inherited from Mr Obama.

Economic growth was 2.3% in 2019, matching the average pace since the Great Recession ended a decade ago in the first year of Mr Obama’s eight-year presidency.

Mr Trump had promised much higher.

In delivering his speech, Mr Trump stood before the politicians who voted to remove him from office – and those who are expected to acquit him when the Senate trial comes to a close.

Over his shoulder, visible in nearly every camera shot, was Ms Pelosi, a frequent thorn in Mr Trump’s side who authorised the impeachment proceedings that charged the president with abusing the power of his office to push Ukraine to investigate political foe Joe Biden.

Ms Pelosi created a viral image with her seemingly sarcastic applause of the president a year ago.
This time, she ripped up her copy of Mr Trump’s speech as he ended his address.

When Mr Trump entered the chamber, he did not take her outstretched hand but it was not clear he had seen her gesture.

Later, as Republicans cheered, she remained in her seat.
In advance of his address, Mr Trump tweeted that the caucus chaos in Iowa showed Democrats were incompetent and should not be trusted to run the government.

Michigan Governor Gretchen Whitmer was to deliver the Democratic Party’s official response to Mr Trump’s address and, in excerpts released before the speech, was to draw a contrast between actions taken by Democrats and the president’s rhetoric.

“It doesn’t matter what the president says about the stock market,” Ms Whitmer says.

“What matters is that millions of people struggle to get by or don’t have enough money at the end of the month after paying for transportation, student loans, or prescription drugs.”

TOP TRUMPS: The Don Pledges YUGE Trade Deal With UK After Boris Win
SO MUCH WINNING: Trump Acquitted As Pelosi’s Impeachment RIPPED UP
To Top