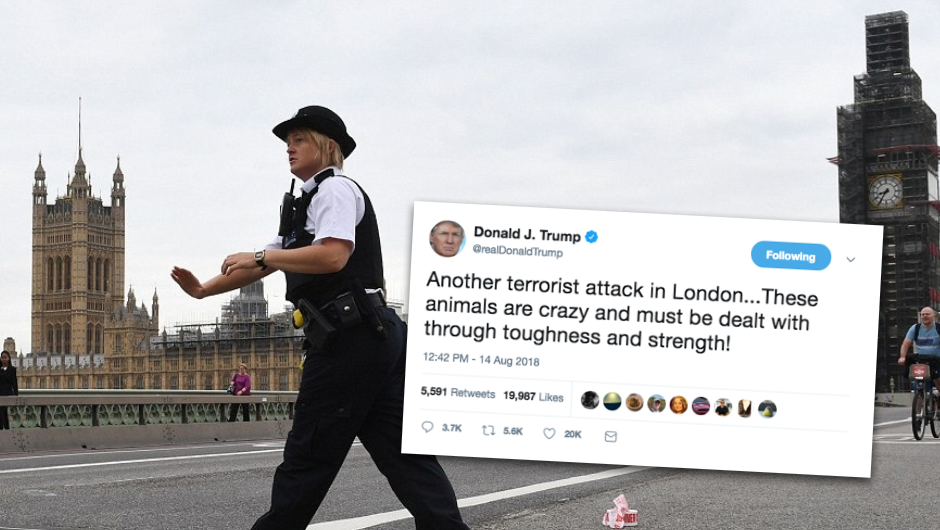 PRESIDENT Donald Trump has responded to the latest Terror attack on the streets of Britain.

The President tweeted: “Another terrorist attack in London…These animals are crazy and must be dealt with through toughness and strength!”

Terror Police are investigating the terror attack in London after a car driving at 50mph ploughed into pedestrians and a barrier outside the Houses of Parliament.

The driver was described as being black and wearing a puffa coat, he was pulled from the smoking silver vehicle by around a dozen armed officers who had their rifles trained on him following the rush hour smash.

A ‘loud bang’ echoed around Parliament Square at 7.30am and witnesses said the car was travelling at up to 50mph and appeared to ‘intentionally’ swerve towards Parliament and smashed into a security checkpoint barrier.

Anti-Radical Islam Activist Tommy Robinson asked what the whole of England is thinking right now, and has said ‘How will they downplay this one?

He suggested a few excuses such as ‘Mental illness’ and ‘Dangerous driving.’

LATEST: Terror Police Launch Investigation after Westminster Attack
HAS ANYONE SEEN OUR PRIME MINISTER?: Appeaser Theresa WILL NOT Return From Holiday Following Terror Attack
To Top