TRUMP RALLY: Prez attacks Dems; "They Will Stop At Nothing To Run Our Lives"
Advertisement 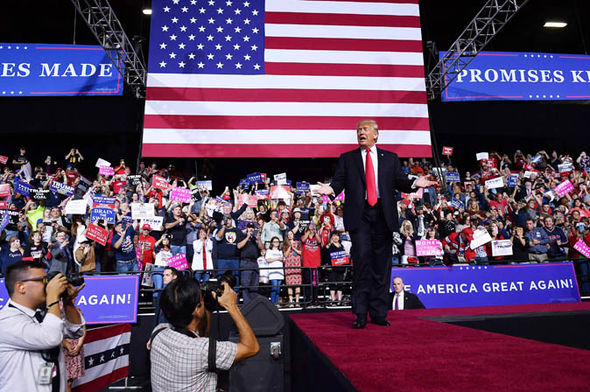 PRESIDENT Donald Trump launched an attack on The Democrats as he prepares for the U.S. Midterm Elections.

At a true-style Trump rally, Mr Trump attacked Democratic opponents at a rally in West Virginia.

Trump accussed the party of threatening to “run down the values” of the United States and “ransacking the nation’s wealth”.

The US leader is undertaking a week of rallies in five states starting on Saturday in a bid to secure the support of Republican voters ahead of the crunch midterm elections taking place in November.

“They will turn it around, make it bad so fast.”

“And they’re determined to take back power by any means necessary.

“You see the meanness, the nastiness. They don’t care who they hurt, who they have to run over to get power.”

The US leader mimicked the Democrats’ liberal attitudes to issues including border control, tax and crime in a mocking statement.

He branded Mr Kavanaugh an “accomplished legal mind” with a “sterling record of public service”, despite facing accusations of sexual misconduct by at least three women.

President Trump said: “On Thursday the American people saw the brilliant and quality and courage of our nominee for the United States Supreme Court Judge Brett Kavanaugh.