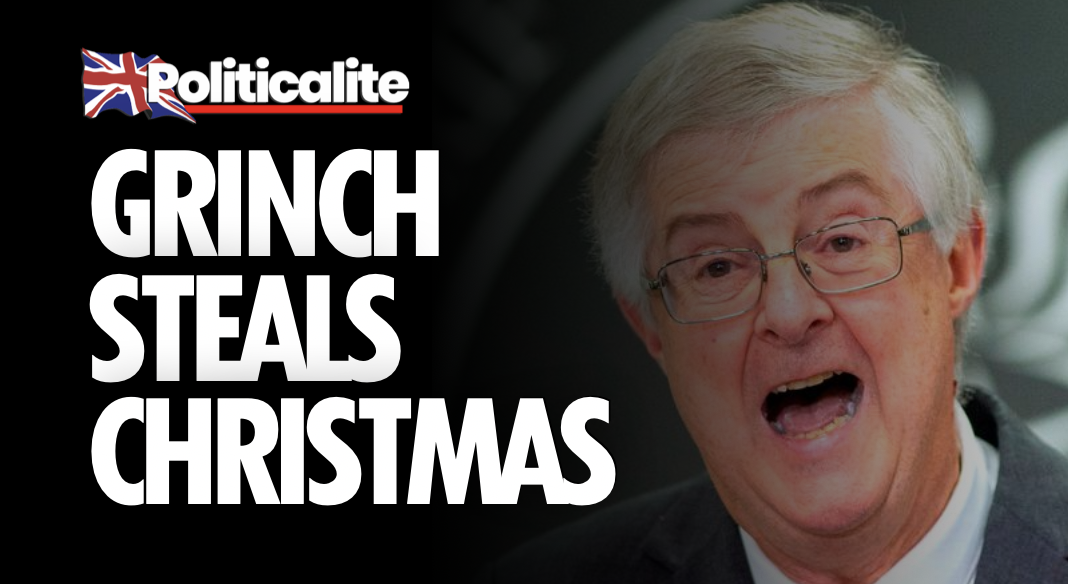 WELSH Labour has sparked outcry after announcing a fresh Coronavirus Lockdown starting on Christmas Eve, despite agreements from all four UK countries to relax Covid restrictions over the festive period.

Wales’s two household limit for mixing during Christmas will be made into law, the Welsh Government has said.

The decision came just hours after First Minister Mark Drakeford announced during a press conference that lowering the amount of homes that can form a Christmas bubble from three to two was guidance rather than a requirement.

On Wednesday morning, the UK’s four nations had agreed not to amend the rules for the relaxed period between December 23 and 27, before Cardiff Bay’s U-turn later in the evening.

Mr Drakeford had earlier said while the joint UK approach would still allow up to three homes to form a bubble, the coronavirus crisis in Wales is “so serious” that people should not take up the full allowance.

The prevalence of the virus in Wales has reached the point where we must now move to alert level 4.

Non-essential retail will close on Christmas Eve, hospitality will close from 6pm on Christmas Day and household mixing and travel restrictions will tighten from December 28.

The spokesman told the Politicalite: “Ministers decided this afternoon that we will be amending the regulations in Wales. So for December 23 to 27 the restriction on two households meeting will be part of Welsh law.

First Minister Mark Drakeford speaking at a press conference in Cardiff (Ben Birchall/PA)
“It makes it easier, so we don’t have the position where the law says one thing and the guidance says something else.”

The spokesman said the law would also allow for an additional person living alone to join with a two-household bubble.

At Wednesday’s Welsh Government briefing, Mr Drakeford said: “The fewer people we mix with in our homes, the less chance we have of catching or spreading the virus.”

He said Wales’s then-guidance on limiting household bubbles was a reflection of “how serious things are in Wales”.

Mr Drakeford denied that the different messages across the UK are “confusing”, saying: “You have to recognise that the position is different in parts of the United Kingdom as it has been through the whole of the coronavirus experience.

“We face a particularly challenging moment as we go into those five days of Christmas.”

Mr Drakeford said he “cannot simply set aside” messages he has received from people explaining to him the impact that cancelling the relaxed period will have on their lives, despite NHS staff warning that going ahead with it will put further strain on an already overstretched health service.

But Mr Drakeford said: “Those mental health harms are equally as real.”

He claimed that the NHS “was coping” with the recent surge in cases and would continue to do so if the relaxed period put further strain on the system, despite reports of ambulances carrying patients having to queue outside hospitals and doctors saying their wards were nearing capacity.

When challenged, Mr Drakeford said the NHS “is coping because it continues to see, to admit and to treat the people who come to its door”, before suggesting it wasn’t necessarily “able to do it in the way it would wish to do it”.