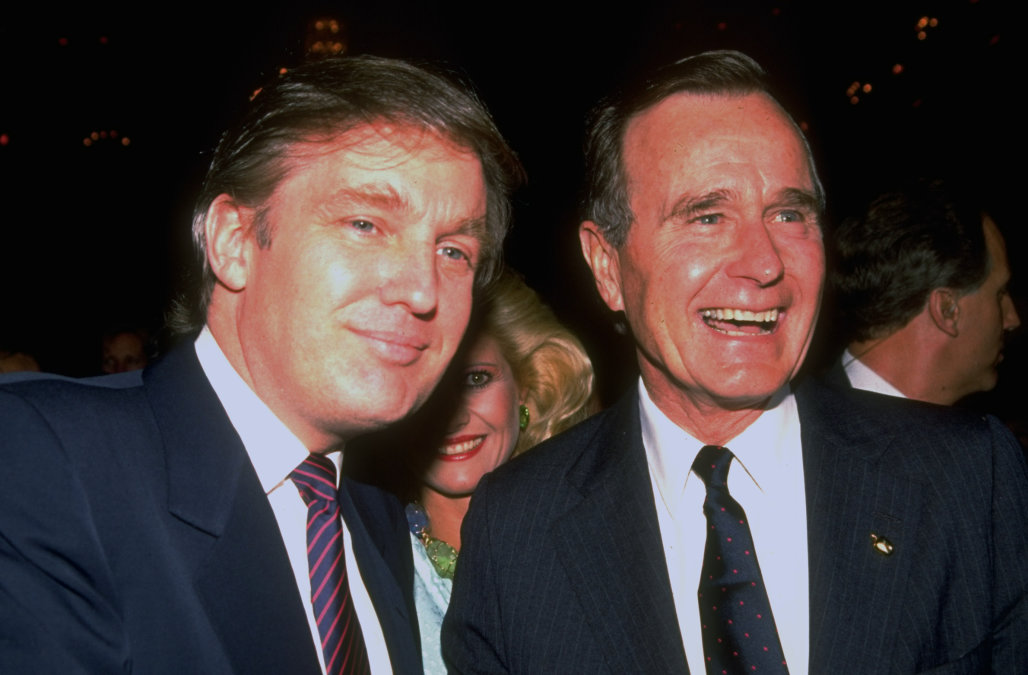 FORMER President George H.W. Bush, who spent a lifetime in public service and as the nation’s leader scored a decisive victory over Saddam Hussein but battled a faltering economy, died Friday at age 94.

He is survived by five children (a sixth died in early childhood) and 14 grandchildren. His wife of 73 years, Barbara Bush, died in April 2018.

George H.W. Bush was known for his gentlemanly demeanor, dedication to traditional American values, willingness to take on foreign despots like Iraq’s Hussein and Panama’s Manuel Noriega, and presiding over the breakup of the Soviet Union.

In childhood, he was nicknamed “have half” for his generosity in offering other youngsters half of whatever he had. After leaving office, he was often referred to as “41” – shorthand for his status as America’s 41st president and to distinguish him from his son and fellow president, George W., who was known as “43.”

George Herbert Walker Bush was born June 12, 1924 in Milton, Mass., the son of Dorothy Walker Bush and Prescott Bush, a banker who later became a Republican senator from Connecticut. The family, which included four sons and one daughter, was wealthy and politically active.

Bush attended Phillips Academy in Andover, Mass. and after graduating on his 18th birthday, he enlisted in the U.S. Navy. He was commissioned that same year, becoming the youngest pilot in the Navy, and flew 58 combat missions in the Pacific. In 1944, he was hit by anti-aircraft fire 600 miles south of Japan but managed to bail out, and was awarded the Distinguished Flying Cross and three Air Medals.

On January 6, 1945, the 20-year-old Bush married 19-year-old Barbara Pierce of Rye, N.Y., whom he had met at a Christmas party three years earlier. They had four sons, George, Jeb, Neil and Marvin, and two daughters, Robin and Dorothy. Robin died of leukemia at age three.

Following World War II, he enrolled at Yale University, where his first son, George W., was born. Bush graduated Phi Beta Kappa with a degree in economics and was captain of the varsity baseball team.

He and Barbara then moved to Texas where he worked in the oil business and was elected to two terms in the U.S. House of Representatives. After losing a campaign for the Senate in 1970, Bush was appointed to a series of high-level political positions: U.S. Ambassador to the UN, chairman of the Republican National Committee, Chief of the U.S. Liaison Office in Beijing and Director of the Central Intelligence Agency.

In 1980 he was elected to the first of two terms as Ronald Reagan’s vice president and in 1988 was nominated by the Republicans to carry the party’s banner, with Sen. Dan Quayle of Indiana as his running mate, in that year’s presidential election.

At his January 20, 1989 inauguration following his defeat of Democrat Michael Dukakis, Bush declared “a new breeze is blowing and a world refreshed by freedom seems reborn…the totalitarian era is passing…”

And, in fact, the world did dramatically change with the end of the Cold War, the breakup of the Soviet empire and the fall of the Berlin Wall.

But Bush faced new international challenges, as well. In 1989 he sent American troops to Panama to depose that country’s leader, Gen. Manuel Noriega, who was returned to the U.S. to stand trial as a drug trafficker. In 1990, he put together a 30-nation coalition to oppose Iraq’s invasion of Kuwait and in early 1991 launched Operation Desert Storm, a 100-hour land battle that routed the Iraqi army.

But Bush – who once famously said “Read my lips: no new taxes” — was faced with economic discontent at home. Trying to reduce the deficit, he signed a bill to raise taxes and also had to deal with failing savings and loans.

On the judicial front, he made two Supreme Court appointments – David Souter in 1990 and Clarence Thomas in 1991.

Although occasionally criticized for his lack of eloquence – such as referring to a focus on the larger picture as “the vision thing” – Bush’s comments also could be endearingly frank.

Referring to his dislike for a particular vegetable, he once said, “I do not like broccoli. And I haven’t liked it since I was a little kid and my mother made me eat it. And I’m President of the United States and I’m not going to eat any more broccoli.”

Following his defeat by Bill Clinton in the 1992 election, George and Barbara Bush moved to Houston, where he had long maintained a hotel room as his legal address. They also spent time in Kennebunkport, Maine, where the Bush family has long had a waterside home.

He made appearances on behalf of his son, George W., during his administration and in 2005 joined forces with Bill Clinton, the man who defeated him, to help those devastated by Hurricane Katrina and by the Asian tsunami.

“”Because you run against each other, that doesn’t mean you’re enemies,” Bush said at the time, summing up his political philosophy. “Politics doesn’t have to be uncivil and nasty.”

Active until his last years, when his health confined him to a wheelchair, Bush celebrated his 90th birthday jumping out of a helicopter.

More recently, Bush joined the four other living ex-presidents in the fall of 2017 for a concert in Texas to benefit victims of hurricanes Harvey, Irma and Maria.