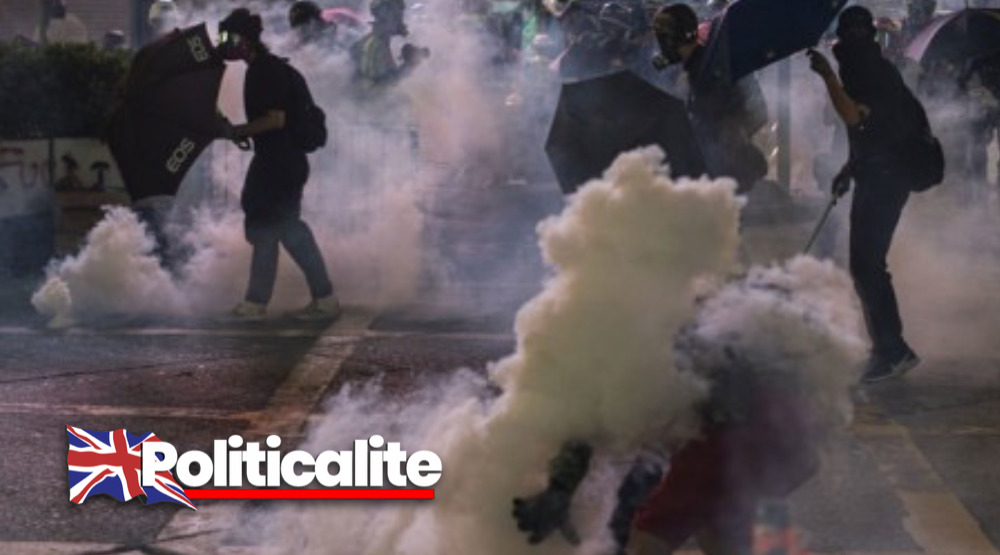 HONG Kong protesters have vowed to “squeeze the economy” as the increasingly divided city reels from one of the worst weeks of violence in the months-long crisis.

Protests have swept the global financial hub since June as many in the city of 7.5 million people have vented fury at eroding freedoms under Chinese rule.

A marked change in tactics last week to a “Blossom Everywhere” campaign of blockades and vandalism stretched the police force, shut down large chunks of Hong Kong’s train network and forced schools and shopping malls to close.

Students and protesters occupied several major universities around the city — the first time a movement characterised by its fluidity and unpredictability has coagulated in fixed locations.

A poster circulating on social media called for the “dawn action” to continue on Monday. “Get up early, directly target the regime, squeeze the economy to increase pressure,” it said.

The education bureau said schools will remain closed at the start of the week “for the sake of safety”.

The protests started against a now shelved bill to allow extradition to China but have billowed to encompass wider issues such as perceived police brutality and calls for universal suffrage in the former British colony.

Two people have died this month as the violence worsened, while the financial hub has been pushed into a recession by the turmoil.

Sunday’s exchanges of tear gas and petrol bombs broke out as protesters occupying Hong Kong Polytechnic University in Kowloon — now a key battleground near the blocked Cross-Harbour Tunnel — fight to keeping their stranglehold on the major transport link.

The streets around Hung Hom were thick with smoke as fires burned between the lines of black-clad activists, known as “braves”, and police in full riot gear launched tear gas rounds.

Dozens of government supporters had gathered in the area earlier to clear barricades near the university campus, which was the scene of more violence overnight as officers clashed with protesters.

Around 80 to 100 middle-aged residents clapped and cheered as they moved debris from the road near the entrance to the tunnel that connects Kowloon with Hong Kong island — shut since Tuesday — before protesters in masks and their signature black t-shirts returned to rebuild the roadblock.

Television images showed activists throwing bricks at the residents to drive them away.

The Polytechnic University (PolyU) has become a flashpoint in the city rocked by a week of intensified violence and chaos. A message on the university’s Facebook page urged demonstrators to leave “immediately”.

“In view of safety concerns posed by possible violent unlawful activities conducted by protesters who are still occupying the PolyU campus, the University again urges all people on campus, including students and staff members, not to stay, and to leave as soon as possible,” the post said.

A 23-year-old PolyU student called Kason said at the scene: “It will be good for us if we can have a base to keep our gear and have some rest at night before we set off for another fight in the morning.”

PLA soldiers — based in barracks near Hong Kong Baptist University — briefly came out on Saturday to help the clean-up after a week of disruption, a rare and highly symbolic troop movement unsolicited by the city’s embattled government.

The action saw scores of soldiers from the garrison, which is confined to the barracks under Hong Kong’s mini-constitution, with crewcuts and identical gym kits conduct a lightning-quick removal of bricks and debris near their base.

Chinese state media has repeatedly warned that troops could be deployed to quell an unprecedented crisis in the semi-autonomous city that has entered its sixth month.
Confirming the brief deployment, the PLA said it acted to open a debris-strewn road outside their Kowloon Tong barracks to traffic, winning “applause from residents” in the process.

The last time soldiers assisted in the city was in 2018 to clean up after a typhoon.

A spokesman for Hong Kong’s government said the troop movement had not been requested by city authorities but was instead a “voluntary community activity initiated by themselves”.